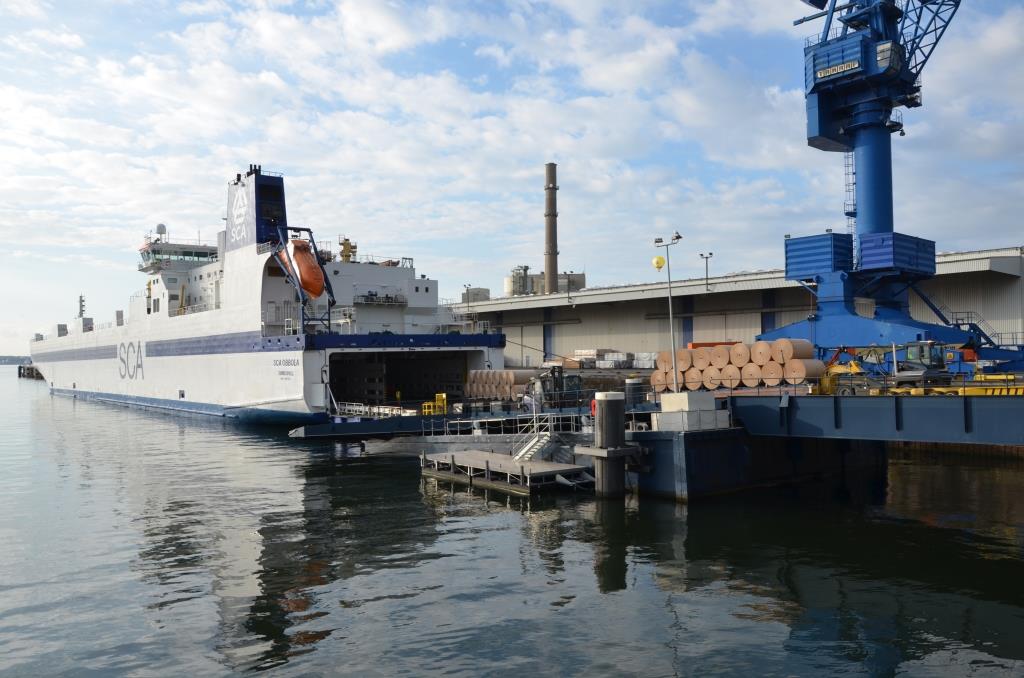 The Swedish groups SCA (Svenska Cellulosa Aktiebolaget) and Iggesund Paperboard AB (Holmen Group) will use the new forest products and logistics centre to handle and store 850,000 tonnes of their high-value paper products a year which will be distributed  throughout central and western European markets.

Dr Dirk Claus, Managing Director of the Seehafen Kiel GmbH & Co. KG said: “A port takes such an important step perhaps only once every ten years. The paper products business adds a further pillar of support to Kiel’s port activity. Along with the visible investment into the terminal facilities, the extension of our company’s logistic competence has been decisive.”

The forest products centre comprises the No. 1 and No. 2 warehouses, both of 10,000 m² and now with new roofs and floors, as well as the new Number 5 Shed which, with its ground floor area of 18,000 m², is one of the biggest warehouses in the whole of Kiel. Also new is the 7,000 m² Shed 8, which is used for transport cassettes and was erected to give direct access to the ship berth and offer maximum weather protection during unloading. That offer is further complemented by the small Shed 4 and by a carriage shed, meaning that a total of more than 50,000 m² of hall space is available at the new SCA Terminal.

Large volumes of paper products were handled in the Ostuferhafen and in the Nordhafen already in the 1980s and 1990s so the inauguration now of the new SCA Terminal marks the return of paper to the Kiel Fiord. ”Paper is a fascinating Scandinavian product which is ever-present in our daily lives”, said Dirk Claus. “It’s a product that quite simply belongs in a facility like the Ostuferhafen.”

After the completion of an initial start-up phase, the SCA cargo ships “Obbola”, “Ortviken” and “Östrand” have been arriving in the Ostuferhafen from Sundsvall every Monday and Saturday in rotation since the start of October, to unload up to 160 cassettes of paper. The product palette ranges from cellulose materials and paper for printing to strong liner and cardboard boxes for high-quality packaging – destined for the German and European markets. In addition overseas containers are packed here for shipment via Hamburg to the Far East – Shanghai and Hong Kong.

On their return trip to the Swedish east coast the SCA ships can carry different types of cargo, such as vehicles, breakbulk, steel or recycling materials. One important commodity in this connection is waste paper for which a special storage area has been created in the Ostuferhafen.

The inauguration of the SCA Terminal has completed an important new step in the development of the Port of Kiel. As a result of its new business, it has added warehouse manager and logistics partner to its already existing functions as a port operator and transhipment company.