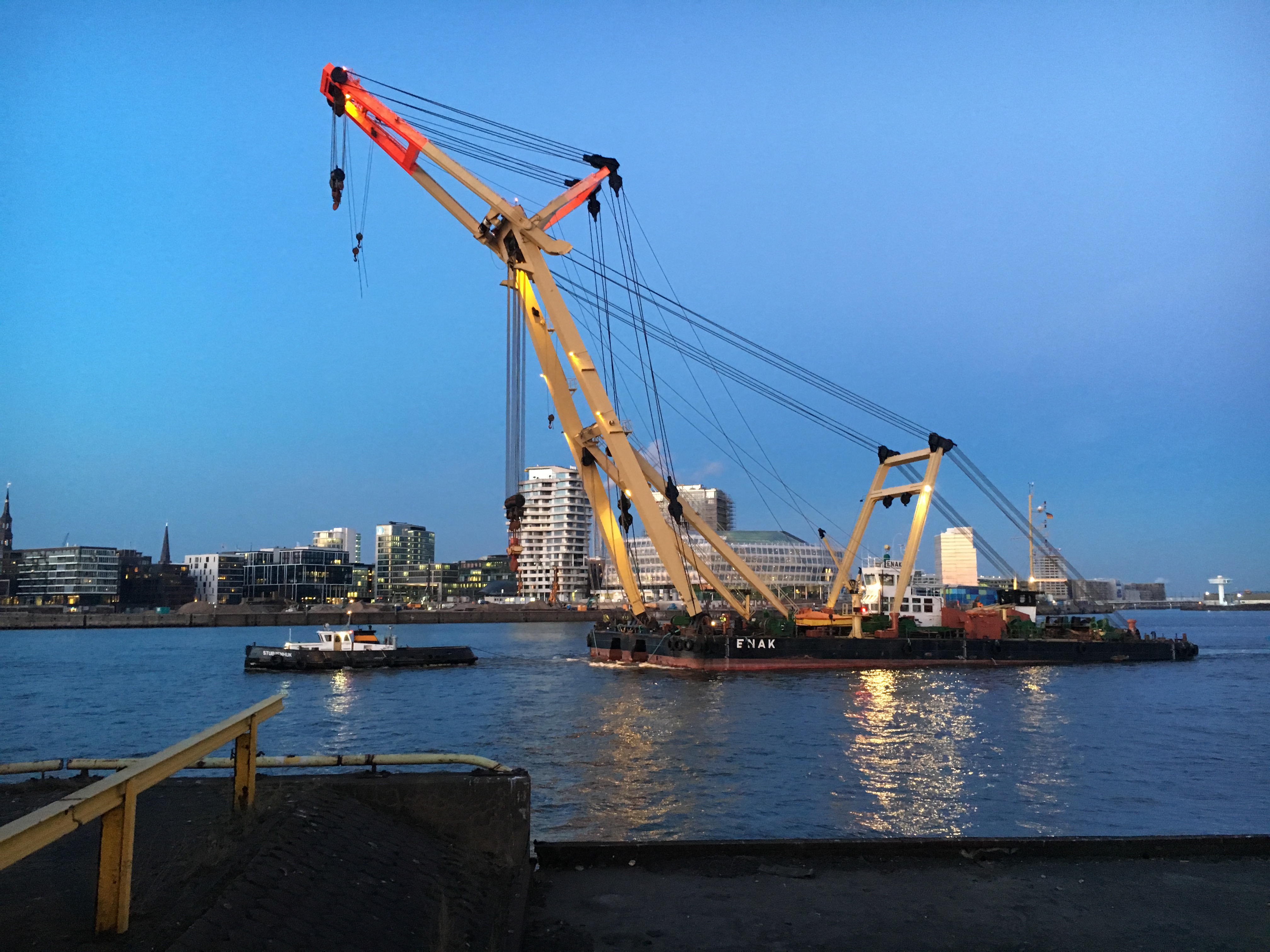 In the year 2018, the Port of Hamburg is offering an optimised service portfolio for handling ultra-heavy loads. With an unit load capacity of 600 tonnes, ‘Enak’ is the most powerful salvage/floating crane in Germany. This heavyweight was formerly stationed in Bremerhaven. The new owner Lührs Schifffahrt, who acquired ‘Enak’ from Bugsier Reederei, has transferred the floating crane to Hamburg.

Built in 1967, technically upgraded in 1993 and now classified by DNV GL, the crane is 55 metres long and 25 metres wide. It operates under the German flag and in Hamburg occupies a berth in Ellerholz docks. Recently it was deployed on a spectacular rescue: After a pedestrian bridge to the musical theatre showing ‘The Lion King’ collapsed into the River Elbe in March, ‘Enak’ raised it and spirited it away for repairs.

As a universal port, Hamburg offers a wide range of waterside cargo handling services. Along with containers and bulk cargoes, these naturally also cover conventional general cargoes. With a volume of 1.4 million tonnes, these may constitute no more than 1.5 per cent of total throughput, but their depth of added value and impact on jobs make them an important element in the Port of Hamburg’s cargo mix.

Several specialist multi-purpose handling facilities, including Wallmann & Co., C. Steinweg (Süd-West Terminal), Rhenus Midgard and Unikai Lagerei- und Speditionsgesellschaft are well equipped to handle project shipments, heavy and out-of-gauge cargoes. Ultra-heavy general cargoes are usually handled with the aid of ship’s own lifting gear or quayside crane capacities to a maximum of 400 tonnes. In Hamburg the two floating cranes HHLA III (100 tonnes) and HHLA IV (200 tonnes), which can lift up to 300 tonnes when working in tandem, are also available. The ‘Enak’ with its capacity of up to 600 tonnes now represents an even more powerful option.

Technology giant Siemens was able to benefit from this. When power supply equipment needs to be loaded, Hamburg with its specialised cargo-handling facilities is the most important port in the North Range for the group. Gas turbines from Berlin and transformers from Nuremberg are two examples. Such large transformers have a unit weight of 550 tonnes. It was impossible to shift them here with Hamburg’s crane capacities as they stood. ‘Enak’ now provides an option for shipping such mammoth transformers and other ultra-heavy cargoes via Hamburg.