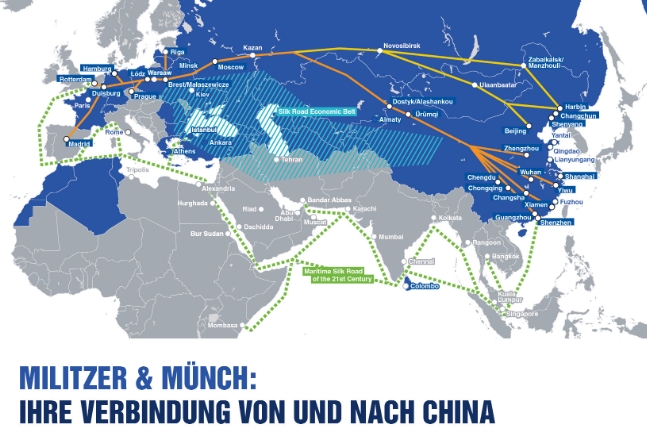 In the year-on-year comparison, the Militzer & Münch Group achieved a clear increase in its FCL and LCL transports on the Europe-China trade lane. In regard to full container load shipments, the forwarder registers growth by nearly 30 per cent; the number of less than container load transports even rose by 50 per cent.

The team recently won a new key account from the technology industry. The team is going to handle the new customer’s FCL and LCL transports between China and Europe – east- and westbound.  “The good development along this route gives us the chance to continually extend our range of products”, says Michael Spitzlei, Head of the Rail Competence Center at M&M air sea cargo GmbH.

The newest service is the transport of LCL consolidation boxes by rail along the Duisburg-Wuhan connection; the transports leave from Duisburg every Saturday. Rail transport from Europe to China takes 21 to 23 days. For all Militzer & Münch rail transports along the Europe-China route, the Rail Competence Center serves as central hub.

“With our own branches or delegation offices along the New Silk Road, we are perfectly positioned to serve connections between Europe and China”, says Michael Spitzlei, Head of the Rail Competence Center at M&M air sea cargo GmbH. “Cooperating with our sister company InterRail and with many Militzer & Münch country organizations, we offer eastbound and westbound rail traffics. We also do pre- and on-carriage by rail and road.”

Militzer & Müncf has 2,000 employees at over 100 locations in approximately 30 countries. The company founded in 1880 is headquartered in St. Gallen, Switzerland,  offers worldwide air and sea freight services as well as road and rail transports and project logistics.

M&M operates with a dense network of branch offices in Eastern Europe, the CIS, the Middle East and the Far East as well as in the Maghreb countries. M & M also operates in the countries in Central Asia along the New Silk Road, such as in Kazakhstan, Uzbekistan, Kyrgyzstan, Mongolia, Tajikistan, Turkmenistan, Azerbaijan and Georgia.