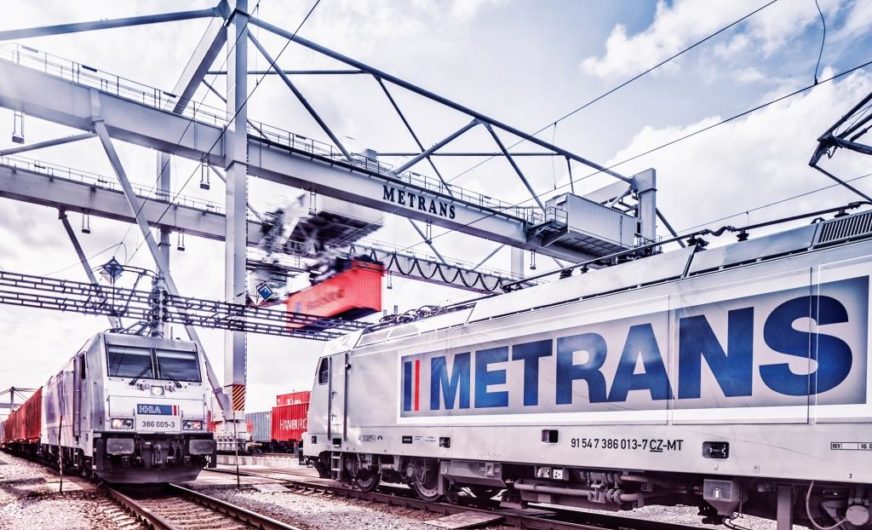 In the spring of 1991, the Metrans company was founded with the aim to more closely connect the then Czechoslovakian capital Prague with the Port of Hamburg via rail. Metrans commenced operations in October 1991. Twenty-five years later, the company is the market leader for container transport in seaport-hinterland traffic in Central and Eastern Europe.

Metrans’ dense network stretches from the Netherlands, Germany, Austria and Italy to the Czech Republic, Slovakia, Hungary and Slovenia, right up to the Turkish metropolis of Istanbul. Approximately 300 trains travel on this network every week.

Its nine inland terminals are the points of intersection from which Metrans transports containers in both seaport-hinterland and, increasingly, continental traffic via its own locomotives and wagons. Next year, Metrans will open its tenth inland terminal in the Hungarian capital Budapest, with an annual capacity of around 250,000 TEU.

Hamburger Hafen und Logistik AG (HHLA) holds just over 90 percent of the shares in Metrans and will continue to push on with the strategic expansion of rail activities at its intermodal subsidiary. After all, the Port of Hamburg benefits from the growth in container transport by train as well. The excellent, high-frequency and environmentally friendly rail connections with Central and Eastern Europe attract cargo to the port and significantly contribute to the further development of Europe’s largest rail port.

Klaus-Dieter Peters, Chairman of the Executive Board of Hamburger Hafen und Logistik AG: “The pleasing growth that we have seen in our Intermodal segment is mainly driven by our rail subsidiary Metrans. Our investments in our own terminals and rolling stock have significantly increased the segment’s value added. We thus offer our customers reliable and flexible rail connections to Central, Eastern and South-Eastern Europe. Not least as a result of this success, with the Intermodal segment we have also been able to establish a second successful pillar for HHLA as part of our diversification strategy.”

Jiri Samek, Chairman of the Executive Board of Metrans a.s.: “The success of 25 years of Metrans is the result of a visionary idea, its implementation and the partnership with HHLA, the largest terminal operator in the Port of Hamburg. Yet just as important for the success of our company are our loyal customers and our highly motivated employees.”

Investments in the now more than 50 own locomotives, approximately 2,500 wagons and own handling facilities have had a noticeable effect here. In the previous year alone, HHLA invested EUR 77.1 million in the strategic expansion of rail activities.