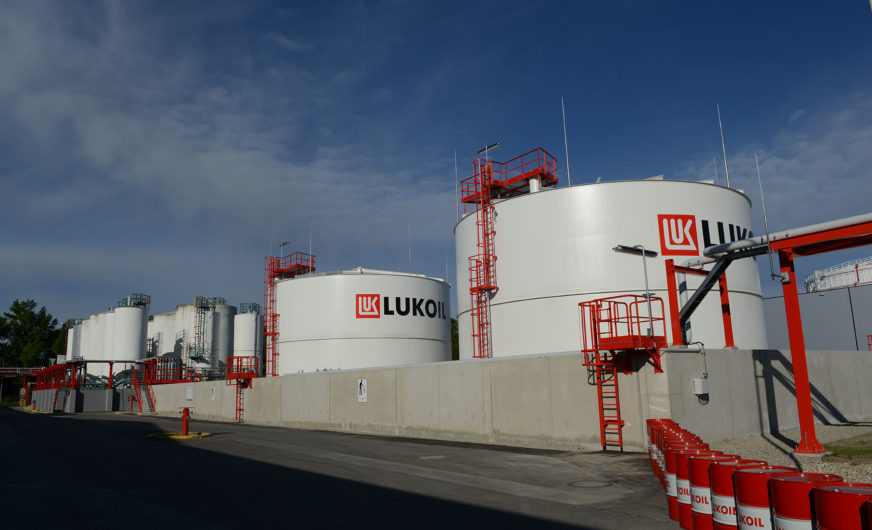 Vagit Alekperov, President of von OAO Lukoil (Moscow), sees the investment in Vienna Lobau as a strategic decision: „The modernisation of the lubricants factory in Vienna is an investment into an integrated building complex offering many technological advantages.“ The result was the best-possible logistic basis for the transport and storage of base oil and end products. In addition, this allows a more flexible production, responding to the needs of European customers and their standards.

Since Lubricants Austria acquired the site in 2014, they had been investing massively into safety and technology. The core pieces of the expansion are a floating berth and an oil transfer terminal, several storage tanks and the conversion of storage into production tanks. This means the previously available capacity is more than doubled, but also ships can be loaded and unloaded now.

The innovations within the production process form the basis for Lukoil’s first fill-business in Vienna, meaning the first motor oil filling of new vehicles. These oils shall be produced in Austria.

Due to several reason, the production site in Vienna is a particularly advantageous location. “Supply by barge allows saving 500 tonnes of CO2 in the first year. In addition, the modern construction of the production facility meets the highest environmental standards, which currently can not be provided by other European producers. The future possibility of direct transhipment from barge to rail makes Vienna a potential hub for Lukoil in Central and Western Europe,” says Maxim Donde, General Director Lukoil Lubricants.

The expansion and the substantial investments are also a benefit to the city of Vienna. In addition to strengthening the port of Vienna, with the planned expansion of capacity the company creates new jobs in the company itself, but also with local suppliers, service providers and logistics companies. “We are confident to establish a modern production site in the heart of Europe, providing quality and logistics advantages, which will make the company to a base outfitter of the European automotive industry in terms of first-fill lubricants,” said Maxim Donde.

The Lukoil Lubricants International group is the international lubricants division of the largest private Russian oil company Lukoil, and generated total sales of approximately USD 834.7 million in 2014. In addition to the production plant in Vienna Lobau, the company has holdings in Germany, Finland, Romania, Bulgaria, Belarus, Ukraine, Turkey, Dubai, Kazakhstan and the U.S.

The parent company Lukoil has the largest is privately owned oil reserves, thus ensuring security of supply for all world markets