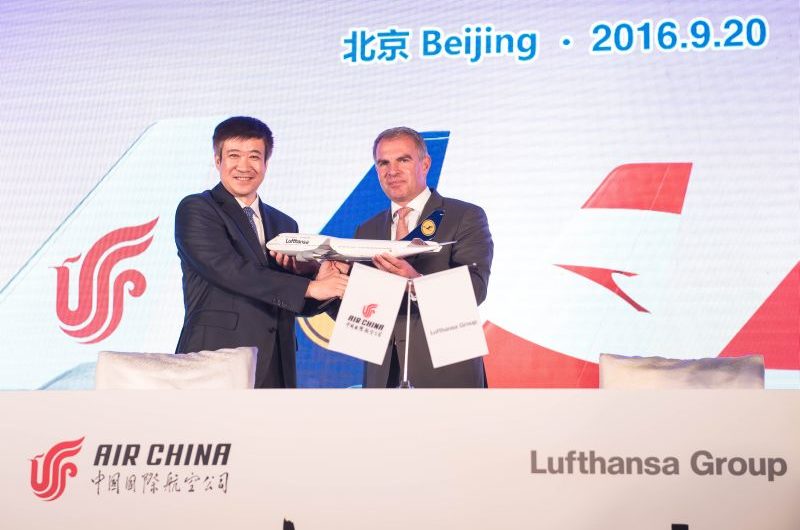 The Lufthansa Group and Air China signed a wide-reaching partnership agreement in Beijing on September 20, which will enable the two aviation groups to jointly operate all connections between Europe and China as part of a commercial joint venture. This means that the two companies will successfully implement what they agreed to do as part of a memorandum of understanding in summer 2014.

“As the flag carrier, Air China is the ideal partner for the Lufthansa Group in the People’s Republic of China. This ground-breaking joint venture will fundamentally strengthen our competitive position on routes between Europe and China. The significantly enhanced partnership will enable us to create additional benefits for customers,” said Carsten Spohr, Chairman of the Executive Board and CEO of Deutsche Lufthansa AG, at the signing of the agreement in Beijing. The Chinese aviation market was one of the most important growth markets worldwide. The group wants to profit from this growth together with their Star Alliance partner Air China.

“The Joint Venture with Lufthansa and the Lufthansa subsidiaries Austrian Airlines and Swiss International Air Lines is another major steps of Air China’s globalization strategy following Air China’s accession into Star Alliance in December 2007. Both parties can further strengthen our overall competitive edge in both China and Europe. Under the Joint Venture framework, we will further expand network coverage in China and Europe, enhance the flight connections in beyond markets and optimize flight schedules, enabling us to bring more and flexible flight choices, favorable fare products and seamless travel experiences”, said Cai Jianjiang, Chairman of Air China, at the Joint Venture Signing Ceremony.