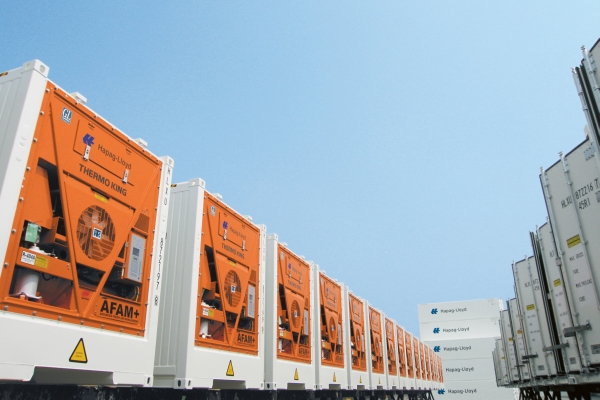 Hapag-Lloyd is investing a double-digit million amount in its container fleet and has ordered 6,000 (12,000 TEU) of the latest generation of reefer containers. The company is deemed one of the largest reefer carriers in the world today. This strong position will enable Hapag-Lloyd to benefit from increasing transport volumes not just on East-West trades, but also on North-South and Latin American trades.
In April this year, Hapag-Lloyd had already ordered five new10,5 00 TEU ships. Each of these ships can accommodate up to 2,100 reefers. The newbuildings are to be used primarily on trades to and from South America, as this region is one of the strongest reefer markets in the world. The new reefers are to be gradually integrated into the container fleet, starting in the coming weeks.
“With our enhanced reefer fleet, we are ideally positioned for the Latin American trade, which is an important part of the reefer business – right on time for the opening of the expanded Panama Canal next year,”
says Rolf Habben Jansen, Chief Executive Officer of Hapag-Lloyd AG.
Hapag-Lloyd uses reefers to transport temperature-sensitive cargo such as fruits, vegetables and pharmaceutical products as well as meat and fish. Around 1,000 of the newly ordered containers will be fitted with controlled-atmosphere technology, which prolongs the life of certain fruits and vegetables, while maintaining the same quality. The state-of-the-art containers will also have cooling units with the highest level of efficiency.
www.hapag-lloyd.com