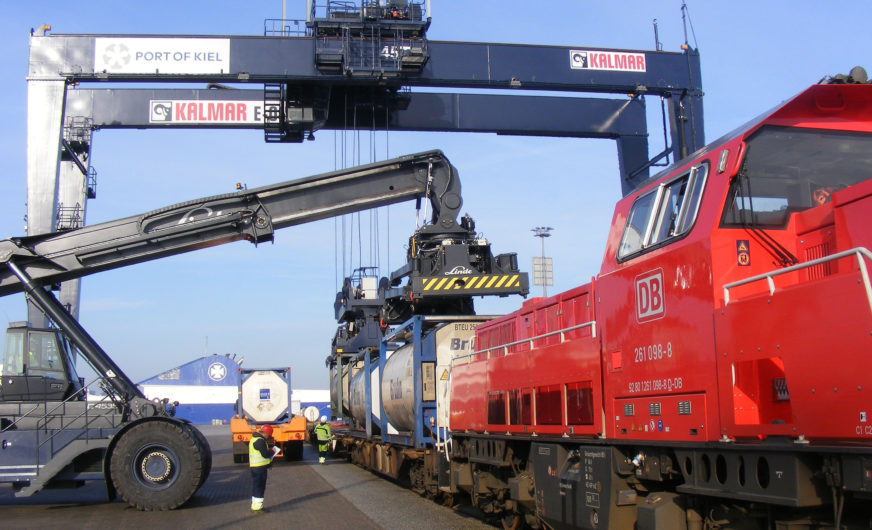 The structure and technics at Kiel’s shunting station in Meimersdorf have been enhanced in such a way that freight trains with an effective length of 740 m (535 m before) can enter and exit the station as of now. . The new entry track enables the management of longer trains as of now and thus strengthens the competitive position of the hinterland railway transport.

The port of Kiel expects a growth rate of 25 % in combined traffic for next year already. In addition to the existing connections of the Kombiverkehr KG company, which link Kiel to the national and European rail network, there will be a 690 m long direct train of CFL Cargo to Bettembourg in Luxemburg to start operations in January.

Kiel-Meimersdorf belongs to the 17 railway projects in Germany that have been realised by the company of Deutsche Bahn within the scope of the federal immediate action programme “Sea-port Hinterland Transport II”.In order to enable the entry of longer freight trains into the shunting station, track no. 9 has been redesigned and optimized in terms of length and the signal and control technology has been adapted. The track has been newly electrified, connected to the existing track system and after installing a switch it has also been linked to the route leading to Kiel Ostuferhafen. The total value amounts to EUR 7.9 million.

Here at Kiel’s shunting station the combined transport train service from Hamburg-Billwerder arrives every workday as well as the direct trains from Italy. The trains are split in Meimersdorf and then go on to the terminals of Schwedenkai, Norwegenkai and Ostuferhafen to get a direct connection to the ferries to Scandinavia and to the Baltic States. In addition, block trains, chartered trains, wagon groups and wagonload freight are accepted.