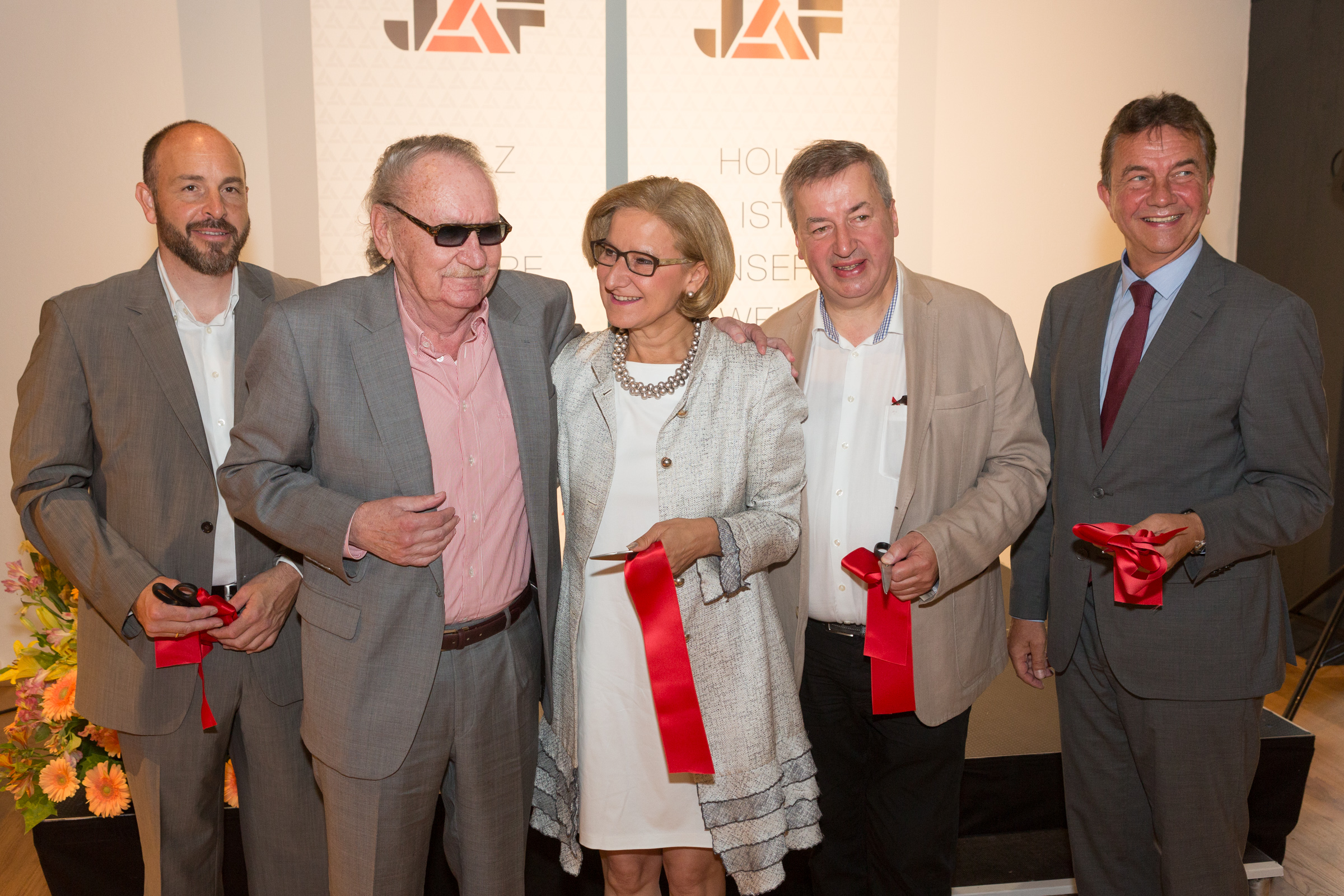 From the charm of the 1970s to the present – that was the motto of the major renovation of the Stockerau branch of J. u. A. Frischeis, which was ushered in at the beginning of 2015: In addition to two new halls with a total of 6,100 m², the covered loading zones have been expanded from originally 400 m² to 4,000 m² as a weather protection  for employees and goods.

“A 1,000 m² cantilever racking hall and a noise barrier in the direction of the residential area were further milestones of our construction activity, which took place during ongoing operation,” said Branch Manager DI Clemens Zika. The result is a 32,000 m², logistically optimally designed area with 21,000 m² of covered halls and storage areas. The logistics offices were also modernized, creating more work quality. During the three years of conversion, around 6,000 m³ of concrete were used on an area of ​​20,000 m².

“If a company has been around for 70 years then that’s a great achievement. There is a lot of work behind it, and that is only possible with the highest quality and professionalism. And there is a need for a constant development of the organization. The company Frischeis is a prime example of a successful blend of tradition and innovation, ” said Lower Austrian provincial governor Mag. Johanna Mikl-Leitner on May 26 at the anniversary event with around 1,200 guests including in-house exhibition with more than 40 exhibitors.

In his words of welcome, Clemens Zika, Branch Manager Stockerau, mentioned that the conversion of the site represents the largest single investment in the company’s history: “When the construction of the new halls and the renovation of the entire site started at the beginning of 2015, we could not have imagined that we would find an impressive final result today, just in time for the 70th anniversary.“

Founded by Josef and Antonia Frischeis, the company was firstly mentioned in a document on November 26, 1948. In the buildings of a former tannery, planks, coal and firewood were among the first commercial goods. In the mid-1950s, the company already had 10 employees. Until the late nineties, the expansion in Austria was in the foreground, in almost every federal state at least one branch was opened.

Since the beginning of the nineties, the focus has been on international growth in parallel: Starting with the neighboring Czech Republic, the company quickly expanded in the following years to other countries such as Germany, Slovakia, Hungary, Croatia, Slovenia and Romania. From 2005, the “young markets” followed with Bulgaria, Bosnia-Herzegovina, Poland, Russia and Serbia.

With the acquisition of DLH Asia in 2014, the JAF Group expanded its international reach to include Asian and North American target markets. In addition, the acquisition of the Swedish company Skanditrä in 2015 opened up new business fields in the international flooring industry. In the same year, Frischeis took over a sawmill in Laa an der Thaya, Austria, and has since then also been offering sawn timber from its own production. Today, the JAF Group, with 2,880 employees and an annual turnover of 759 million euros, is one of the leading European suppliers of wood and wood-based materials.

With over 300 jobs in Stockerau, J. u. A. Frischeis is one of the important employers in the region. On the 70th anniversary, the location Austria continues to be the heart of the JAF Group, which now operates worldwide with 57 locations in 17 countries.