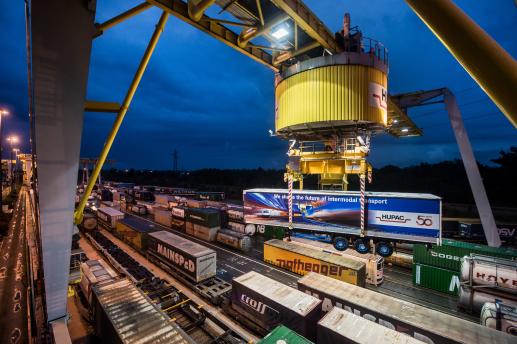 Hupac Intermodal SA (Chiasso / Switzerland) is celebrating its 50th anniversary in 2017. The joint venture, established in 1967 in the Ticino by four transport operators and the Swiss Federal Railways (SBB) with a starting capital of CHF 500,000, has grown into a market leader in intermodal transport with operations throughout Europe.

“We are proud of our past”, Bernhard Kunz emphasised. “Open markets, open systems, our own resources and innovative strength are our credo. But the key to success are our employees. Our goal is to shape the future of intermodal transport – together with our employees, our customers and our partners.”

In 2016 the Swiss intermodal transport operator Hupac transported approximately 737,000 road shipments by rail, which represents an increase of 11.5 percent or 75,000 shipments compared to the prior year. The developments in the segment of transalpine traffic through Switzerland were particularly active and resulted in an increase of 19.4 percent. In the Shuttle Net network traffic growth was boosted once again by the market segment of four-meter semitrailers. Hupac’s four-meter network covers Belgium, Holland, Germany, Scandinavia and Switzerland with over 50 departures per week from/to Italy via Lötschberg/Simplon.

The Company Shuttle business unit, which opened in late 2015, also contributed significantly to the positive developments. Hupac handles 44 trains per week on behalf of individual transport companies. The latter assume the capacity utilisation risk of the so-called “company shuttles” and transfer the organisation and the operation of the trains to Hupac.

Non-transalpine traffic, which is comprised of the markets in Spain, Eastern Europe and the Far East, recorded a small increase of 1.5 percent, while transalpine transports via Austria and France declined slightly.

Hupac views the maritime hinterland transports as an interesting opportunity for growth. The recently established subsidiary Hupac Maritime Logistics GmbH is in the starting gate. The business unit, headed by Sven Lehmen (50), with its operating centre in Duisburg, is focusing on the western range ports of Rotterdam and Antwerp. Once the specific processes required for maritime transportation, such as customs, empty container handling and first/last mile transports, have been set up, Hupac expects to introduce its own maritime connections in the first half of 2017.

In the Far East segment, Hupac will open its European network for transports to/from China. Many of the shipments arriving by train from Asia that now travel the last mile on the road can be transported by rail in Hupac’s network. The business area “Landbridge China” provides connections between the networks. Feeder trains designed for this purpose are in the project phase and anticipated to be put into operation during the first half of 2017.

This year Hupac expects the stable demand for transportation to continue. “A new phase in transalpine freight traffic is beginning with the opening of the Gotthard base tunnel”, said Hupac’s managing director Bernhard Kunz.