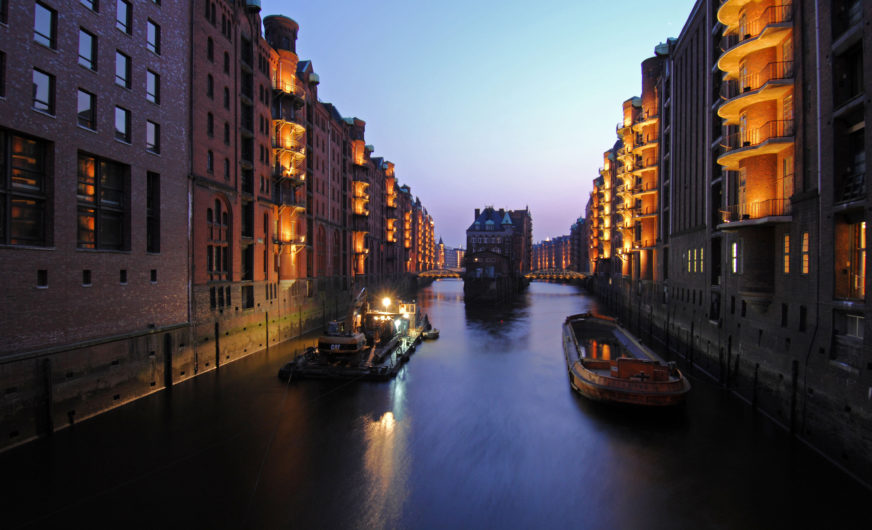 The UNESCO’s World Heritage Committee has approved Hamburg’s application for the “Speicherstadt and Chilehaus with Kontorhaus District” to be included in the UNESCO’s World Heritage list. The decision was made at today’s 39th Committee meeting, which was held in Bonn, Germany. The World Heritage Committee, which comprises 21 UNESCO member states, has been meeting since 28 June. The Committee acknowledged the site’s outstanding universal value, and Hamburg now has its first World Heritage Site.
The World Heritage Committee based its decision on the belief that the Speicherstadt and the Kontorhaus District are “an outstanding example” of buildings and ensembles which “illustrate significant stages in human history”. The outstanding universal value of the two monofunctional but complementary areas is reflected in Hamburg’s historic warehouse district with its connecting network of roads, canals and bridges dating from 1885 to 1927 and in the modern red-brick architecture of the office building ensembles for port-related use from the 1920s to 1940s.
Hamburg’s First Mayor Olaf Scholz comments: “I am absolutely delighted about this success. We, the people of Hamburg, can be proud of our city’s new World Heritage Site “Speicherstadt and Chilehaus with Kontorhaus District”. We have been able to convince the world’s most high-ranking expert committee of the unique national and international role of the Speicherstadt and the Kontorhaus District. This unique role becomes particularly clear when comparing these sites with maritime warehouse complexes and modern office ensembles of the early 20th century in cities around the world. We are aware of this great honour and we will be happy to assume the responsibility to protect and convey this heritage.”
The vote marks the end of a decision-making process stretching over several years. In 1999 the Chilehaus was the first to be included in Germany’s tentative list seeking admission to the UNESCO World Heritage list. In 2007 the Speicherstadt and the Kontorhaus District were further added to the application. The nomination proposal was submitted to the World Heritage Centre in Paris in February 2014. The application dossier and the candidate site were subsequently assessed and evaluated by ICOMOS International. Most recently, Prof. Dr Maria Böhmer, current chair of the World Heritage Committee and Minister of State at the Federal Foreign Office, visited Hamburg to inquire about the application.
www.weltkulturerbe.hamburg.de    www.chilehaus.de    www.hhla.de/speicherstadt