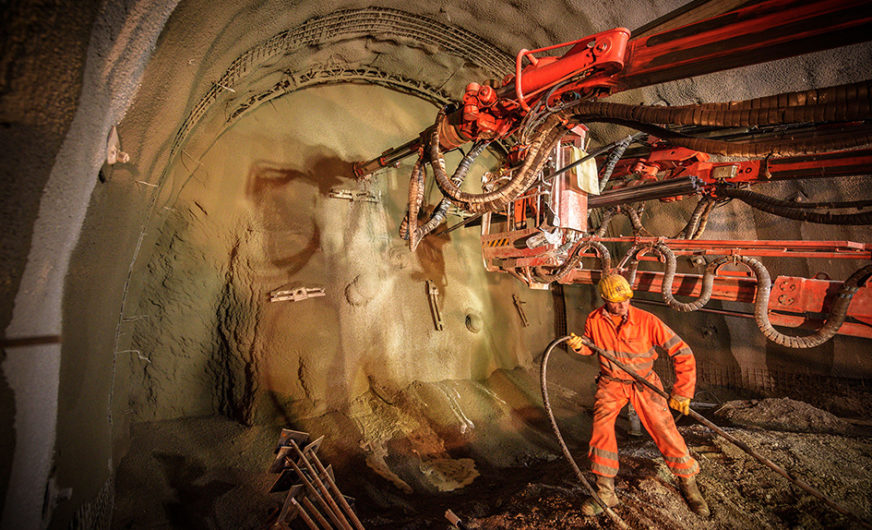 Works have just started on the third and last tunnel section, the south-western section (Baulos Grautschenhof). Thus the Semmering Base Tunnel is fully in construction now. For the approximately 27 kilometers rail tunnel, a total of 62 tunnel kilometers will be digged – in addition to the two railway tunnels, 8 kilometers of access tunnels, more connecting tunnels and shafts.

The railway tunnel is dug from multiple sites and access points. In Gloggnitz, Lower Austria the miners have already penetrated more than half a kilometer into the mountain, they are working on the future rail tunnel tubes. On the other three construction sites (Fröschnitzgraben, Grautschenhof and Göstritz) several entrances and complex shaft systems are being built, allowing to transport the workers, the machines and the construction material to the construction site underground and vice versa. The construction from various access points saves time and helps to overcome the rocks from several sides.

Similarly complex was the access to the construction site deep inside the mountain in Fröschnitzgraben, Styria (Spital / Semmering): Where later on will be the emergency stop and ventilation shafts of the Semmering Base Tunnel, the miners have little by little dug 400 meters deep. From 2017 the actual rail tunnel tubes will be built there – some with a large tunnel dredging machine, partly by dredging and blasting.

In the south-western section Grautschenhof (municipality of Spital / Semmerig) the construction of the two shafts will start this year. In 2017 the actual actual rail tunnel tubes will be constructed there as well.

At peak times around 1,200 people will work directly for the major project on all construction sites of the tunnel. During the construction period 4,500 jobs (including the 1,200) will be created, including also the indirect employees in engineering, catering or commerce.