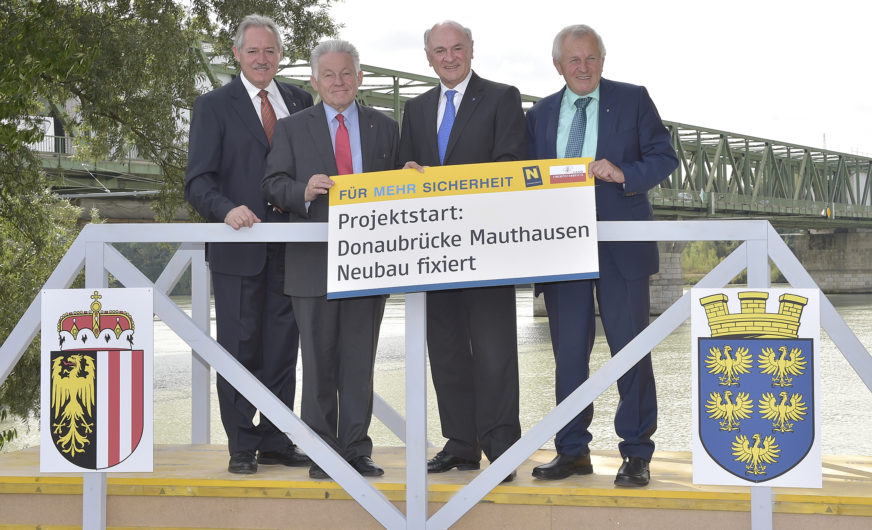 Dr. Erwin Pröll, governor of Lower Austria, Dr. Josef Pühringer, governor of Upper Austria and Franz Hiesl, Upper Austrian roadworks referee vice governor, announced their agreement on rebuilding the Danube bridge in Mauthausen in a joint press conference on August 19. Both provinces will equally share the costs of about EUR 60 million.
In his statement governor Pröll said it was an “important decision“ and an “important future project“. The bridge was very „future oriented“, together with the by-pass road in Pyburg it was a “sign from local politics for the local economy, for commuters and the traffic flow in a very dynamic region.”
Concerning the Pyburg by-pass road he informed about the plan to start the construction works this November, with the opening for traffic expected by the end of 2017: “This drive-round will have significant effects. Today we are counting 14,000 vehicles per day, of them 20 per cent heavy haulage. The implementation of this project will bring out 85 per cent of traffic from settlements.”
The bridge in Mauthausen was “a crucial vital line for economy, tourism and commuters”, emphasised governor Josef Pühringer, it had “regional and supra-regional significance”. He was “glad about today’s agreement”, said Pühringer: „Today we can say Upper and Lower Austria are going to build this EUR 60 million bridge together in the coming years. The next moves will be made immediately after today’s press conference.”
“At present, 22,000 daily vehicles are driving across the bridge, of which 3,300 trucks”, Franz Hiesl Upper Austrian vice governor informed about the current situation.
The existing Danube bridge in Mauthausen is more than 50 years old and reaches its capacity limits due to the dynamic economic upswing, with up to 22,000 cars per day. In addition, a bridge audit 2013 found a massive deterioration of the building fabric.
Via the B 123 Mauthausen federal road this important Danube crossing connects Upper Austria and Lower Austria. The B 123 road is the arterial road of the eastern Mühlviertel region and brings thousands of daily commuters to their jobs in Lower Austria and in the south-central area of Linz. Thousands commuters from Lower Austria in turn have their jobs in Mauthausen, Schwertberg and Perg. At the same time, the Danube crossing is a vital link for the vibrant economic area in Machland and the western part of the Amstetten district.
www.noe.gv.at