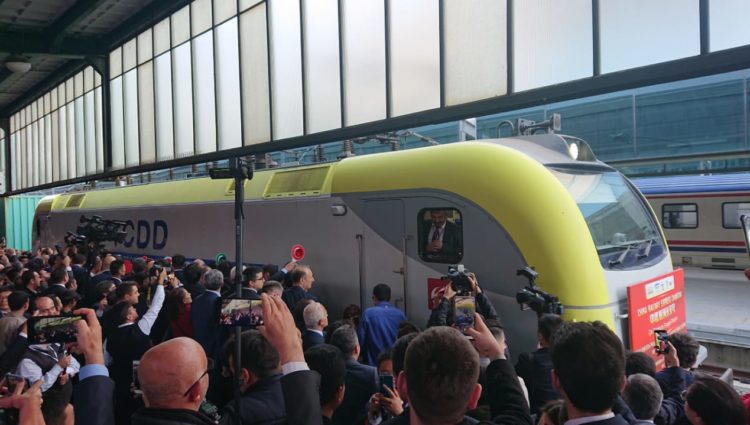 Turkey and the world witnessed a historic moment on 6 November as Ankara welcomed and sent off the first train that departed China and for Europe passing below the Bosphorus via Istanbul’s Marmaray tunnel for the first time, marking the realization of the “Silk Railway” dream. The new service is the implementation of the agreements reached between JSC NC “Kazakhstan Temir Zholy” and the People’s Government of Shanxi Province in the framework of the “One Belt – One Road” initiative.

A distance of 8,500 kilometers, the train, consisting of 42 forty-foot containers with electronics, will overcome in 20 days, combining the territories of ten countries along the route. The rail transport service followed the territory of Kazakhstan for 72 hours and was dispatched from the port of Aktau on a feeder vessel through the Caspian Sea along the TITR route.

The launch of the Xian-Ankara-Prague train proves the demand for the Trans-Caspian International Transport Route in the logistics market, as well as the prospect of developing this corridor in European directions. The fact that, for the first time, a container train crosses the Marmaray underwater railway tunnel under the Bosphorus Strait, makes it historical.”

Thus, Kazakhstan and Turkey together with Azerbaijan and Georgia created a multimodal Trans-Caspian bridge, providing the shortest exit of cargo flows from China, Central Asia, the Siberian region of Russia to Turkey and the Mediterranean. These countries, located between the main world markets, have historically been the hub connecting Asia and Europe, and act as a global bridge.