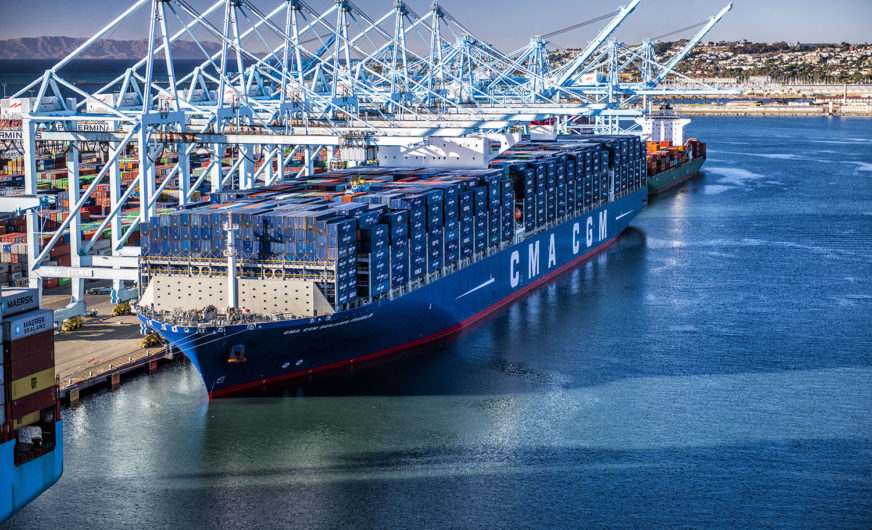 On Saturday, December 26th, the “CMA CGM Benjamin Franklin” berthed in the Port of Los Angeles. With a capacity of 18,000 containers, she is the largest cargo vessel ever to call at a U.S. port. This call was a decision of Jacques R. Saadé, Group Chairman and Chief Executive Officer.
For the first time in the U.S. history, an 18,000 container-capacity vessel called at a U.S. port. As a pioneer Group, this unprecedented call shows CMA CGM’s strong faith in long-term growth potential of the U.S. economy and our commitment to increasing our U.S. market share. Since its creation, the CMA CGM Group has demonstrated boldness: we anticipate our clients’ expectations and we are innovative in order to create bespoke solutions,” said Jacques R. Saadé, Group Chairman and Chief Executive Officer.
The momentous arrival of this ship shows how the Port of Los Angeles and our maritime partners are successfully collaborating,” said Los Angeles Mayor Eric Garcetti, who visited the ship during its Los Angeles call. “Thank you to our friends at CMA CGM for their partnership, and I look forward to welcoming many more Benjamin Franklin-sized ships as our port continues to grow.”
Approximately 11,200 containers were completed during this call. The operations was completed in 56 operating hours, up to 9 cranes were used on the vessel. It is the largest number of cranes deployed simultaneously on the same vessel at the Port of Los Angeles.
During this call, more than 4,500 containers were to be carried by train to their final destination. For several weeks, rail cars have been pre-staged to the Port of Los Angeles to ensure fastest turnarounds. Truckers were also notified of this highest level of activity.
For its second stop in the U.S., the “CMA CGM Benjamin Franklin” left Port of Los Angeles on December 29th and is expected in the Port of Oakland on Thursday, December 31. The vessel will go under the Golden Gate Bridge on the same day, at approximately 9:30 a.m. Pacific Time.
www.cma-cgm.com