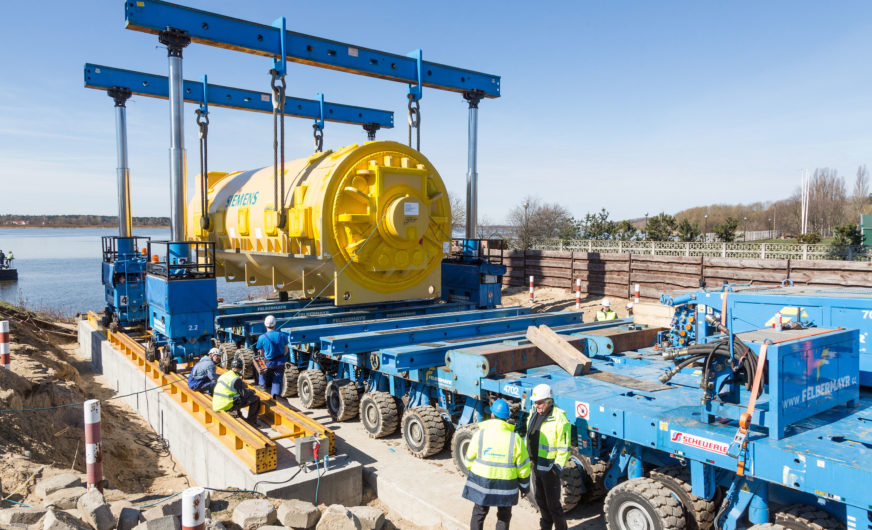 A new gas and steam turbine power plant is being set up for PKN Orlen north-west of Warsaw, in order to cover the rising electricity demand in Poland. The transport order for the main components and their foundation was awarded to Felbermayr Group for transport and lifting Technology. Works have started in February, and will be completed by October.

The components were carried from a total of five departure points to the construction site of the power plant in Plock, covering about 5,000 kilometres. The K turbine and the generator, as well as the turbine rotor and two housing components came from a Siemens plant in Mülheim an der Ruhr in Northrhine-Westphalia.

Due to high water the plan had to be changed there already in the initial stage of the project. The components weighing about 900 tonnes in total, could not be handled according to plan – on a coaster in Mülheim, but had to be transported by barge to  Nordenham, near the mouth of the Weser River to the North Sea, where they were finally transhipped to the coaster within a day.

Further, the gas turbine temporarily stored in Nordenham, and an exhaust diffuser from the Berlin Siemens plant, were also loaded. This was necessary to transport the components via the Kiel Canal, passing the Mecklenburg and Pomeranian Bay to the next hub, some 1,500 kilometres away. “That would have been Gdynia” says Boris Albl. But unfortunately, due to the delay, the shipyard crane was no longer available there, which is why the transport was continued to Gdansk,  on the Vistula estuary, where there is no suitable handling equipment available for the heavyweight high-tech components. Therefore, a 600-tonnes floating crane was ordered from Bremerhaven. Thus, the components could still be transhipped onto waiting pontoons on schedule.

The following about 350 kilometres to the nearest throughput station were covered on the Vistula. “The Vistula is not an impounded river, and has a very low water level all year,” Boris Albl outlined the core problem. Therefore Best Logistics used specially modified heavy lift pontoons with little draught. This way, with a weight of 500 tonnes each,  a maximum draught of only 1.4 meters was achieved.

But the difficulties on the waterway were not yet the last hurdles.

Even the unloading platform caused problems due to permanent undercutting by the river and did not correspond therefore to the static requirements. The solution were four pillars, anchored ten metres deep in the underground and two concrete foundations, left and right of the ramp. Then a rail mounted mast was positioned. “This enabled us to secure the takeover of the two 500-tonnes components after they were transferred on hydraulic tracks from the ship. Subsequently the gas turbine and generator were transhipped using a 1,000-tonnes mast of the Krefeld site to a self-driven vehicle, ” Boris Albl explains the complex process to prepare for the follow-up transport on the road.

A total of 280 tonnes capacitor parts covered an approximately 300 kilometres distance on the road. The parts came from Opole, a city south west of Plock. Due to the maximum unit weight of about 50 tonnes and a width of about seven meters, these shipments were delivered using conventional semi low-loaders. In mid-June a total of 200 tonnes of heavy housing parts for the steam turbine, also from Opole followed.

Subsequently, a transformer with 277 tonnes and two phase shifters, each weighing 110 tonnes will be delivered by Felbermayr’s division for international low-loader rail transport. The starting points of the approximately 1000 kilometres transports are the Siemens locations in Weiz and Linz, both Austria. With the foundation of these components in October, the contract will be finished for Felbermayr.