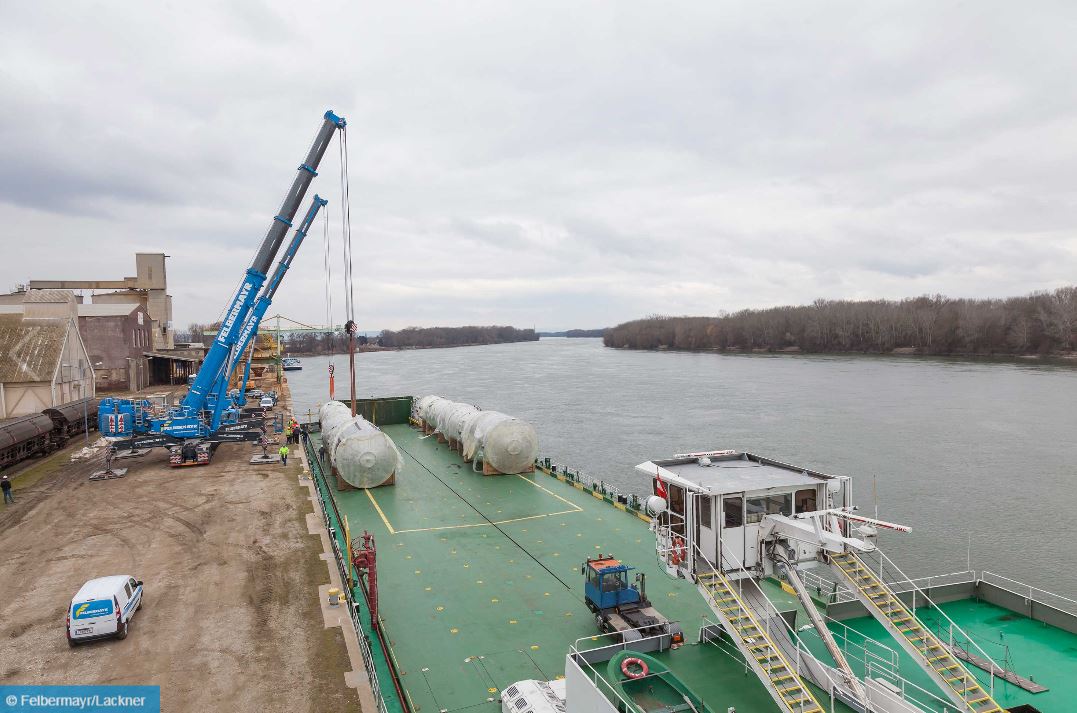 Reconstruction works at the Agrana plant also required heavy transports and the use of lattice boom and mobile cranes this February. Felbermayr provided four cranes for the handling and foundation of the containers weighing up to 136 tonnes. The in-plant transports were managed with a 13-axle trailer with vessel deck.

The plant of the internationally operating starch producer Agrana is located directly at the Danube in Pischelsdorf. So it required relatively little effort to transport the four containers via the Danube from Bulgaria to the factory in Pischelsdorf. Once arrived, only a few hundred meters separated the four containers weighing up to 136 tonnes from their destination in the factory.

Two mobile cranes with maximum carrying loads of 750 and 400 tonnes, respectively were used to unload the ship. Following the load securing, the transports continued to the destination only a few hundred meters away. The problem there: Many pipe bridges, tight curve radii and partly unpaved sections made transport difficult. “We had to plan hard to get this done,” says Peter Niedermair-Auer of the Felbermayr project department. Above all, the two 30-meter-long and 5.1-meter-high falling film evaporators, each weighing 136 tonnes, challenged the technicians in the route planning.

“Together with the tractor unit, the vehicle reached a length of 42 meters and a height of 5.85 meters”, Peter Niedermair-Auer describes the transport dimensions. An on-site inspection revealed a pipe bridge with a clear height of only 5.9 meters, ie only five centimeters difference to the transport height. So it was clear that it would be tight.

After the first of the two so-called falling film evaporators had arrived next to the newly built foundation, it was first unloaded with two cranes already set up and placed on the ground. This was done together with the total of five transport saddles with which were used for its arrival by barge.