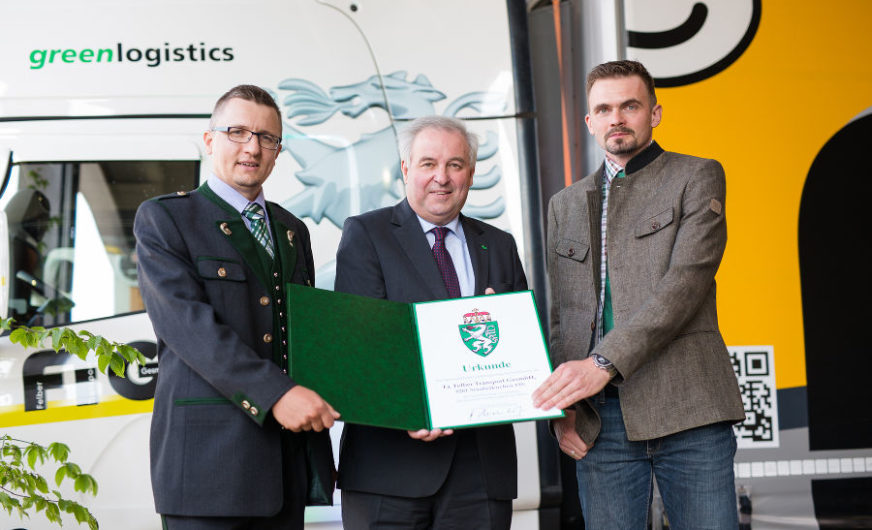 The company based in Sinabelkirchen, eastern Styria has been established in 1953, when company founder Karl Felber bought a 3.5 tonnes truck and decided to become a self-employed driver. Although transport business had been anything else but paying at that time, he already anticipated a great future of far-distance traffic. In 1990, his son-in-law Alois Klamminger took over the company as Managing Director, succeeded by his sons Michael and Bernhard Klamminger in the mid-1990s.

Operating a fleet of about 50 trucks today, Felber Transporte GesmbH is on the road throughout Europe. As a partner of the Styrian export industry, the company attaches great value to reliability, punctuality, and environmentally sound work. The utilisation of bio-fuels and low-emission-class vehicles with a low fuel-consumption contributes to a cleaner environment.

National governor Hermann Schützenhöfer congratulated the company:  “Awarding the Styrian coat of arms, I want to express my thanks to a model company of the domestic industry, for ensuring continuous development of the enterprise under the rough conditions of today’s global competition, creating and ensuring jobs for people in Styria, and strengthening the reputation of Styria as a strong location for economy.”