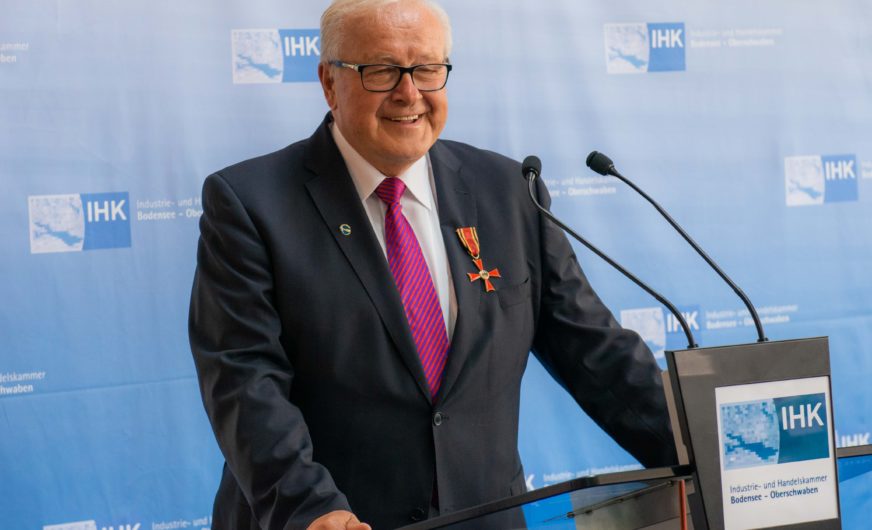 With his heart and passion, Heinrich Grieshaber has been involved for a professional life as an entrepreneur and on an honorary basis for medium-sized businesses and social institutions. On October 24th, 2019, the former President of the Chamber of Commerce and Industry Bodensee-Oberschwaben (IHK) and Chairman of the Supervisory Board of Grieshaber Logistik GmbH in Weingarten was awarded the Cross of Merit on the ribbon.

Nicole Hoffmeister-Kraut presented the order on behalf of the Federal Republic of Germany to around 120 guests from business, administration, science and politics as a member of the Landtag Baden-Württemberg and Minister of State for Economic Affairs, Labor and Housing. Her laudatory speech acknowledged Heinrich Grieshaber’s entrepreneurial and non-profit involvement as a prime example of medium-sized entrepreneurs.

“You are a creator, a maker and have made a name for yourself in a special way for the industry and the people,” said the Minister. The order honors the ten-year honorary post as president of the IHK Bodensee-Oberschwaben, the entrepreneurial activities of the logistician and the foundation for education and training of young people founded together with his wife Gabriele.

The Cross of Merit on ribbon has been the highest recognition of the Federal Republic of Germany since 1951. On average, the Order receives around 70 people a year for special services to the common good. Heinrich Grieshaber was honored for his commitment in the Bodensee-Oberschwaben region. There he has worked with great success for infrastructure projects, commercial space, skilled workers and reduction of bureaucracy.

Founded in 1951, Grieshaber Logistik GmbH is an internationally oriented family business with headquarters in Weingarten (Baden-Württemberg) and branches in Ravensburg, Kerpen, Singen, Baienfurt, Mettmann, Grevenbroich, Cologne-Kalscheuren and Krsko (Slovenia). In cooperation with GR Logistik GmbH, 650 employees with a logistics area of 130,000 m² and a fleet of 125 tractor units generate consolidated sales of around EUR 90 million (2018).