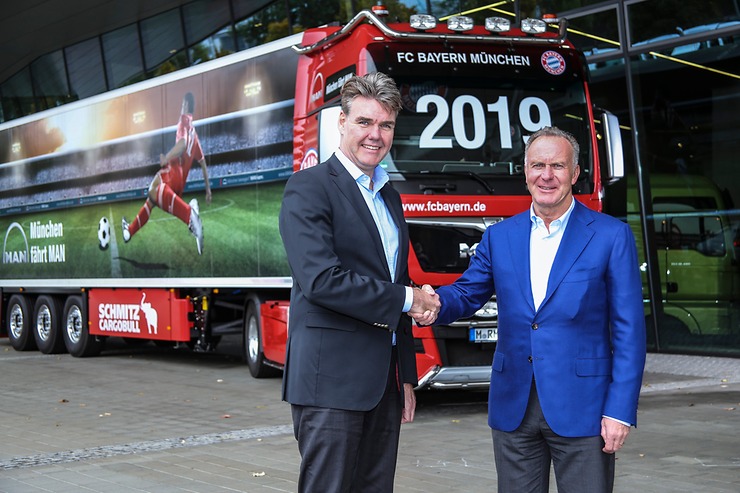 MAN and FC Bayern Munich extended their partnership from 2008 by another three years until 2019. This was announced by Karl-Heinz Rummenigge, Chairman of the Board of Management of FC Bayern München AG, and Joachim Drees, Chairman of the Executive Board of MAN SE and MAN Truck & Bus AG on 17 October in Munich.

“In addition to having Munich as a joint location, MAN and FC Bayern Munich are primarily committed to constant top performances,” says Rummenigge. “FC Bayern is very happy about the continuation of the partnership, and we hope we will win many more titles together.”

Joachim Drees was delighted, too: “We’ve been on the road for the past eight years with FC Bayern, who has always proved its absolute top class in Europe. The partnership will help us to further pursue the internationalization strategy of our brand.”

MAN’s commitment to FC Bayern goes far beyond providing vehicles. The focus, however, is on the MAN Lion’s Coach L as a team coach of the club. “The partnership with MAN is very important for Bayern,” says Andreas Jung, Marketing Director of FC Bayern. “Virtually no other product is so close to the team; we are therefore very pleased that MAN supports us with such great quality. The preparation for the game begins in the team bus.”

MAN has been the official partner of FC Bayern Munich since 2008. As the commercial vehicle partner, MAN provides the record champion’s official team coach as well as a mobile fanshop. Even the FC Bayern Munich basketball team travels to its games in an MAN Lion’s Coach L.