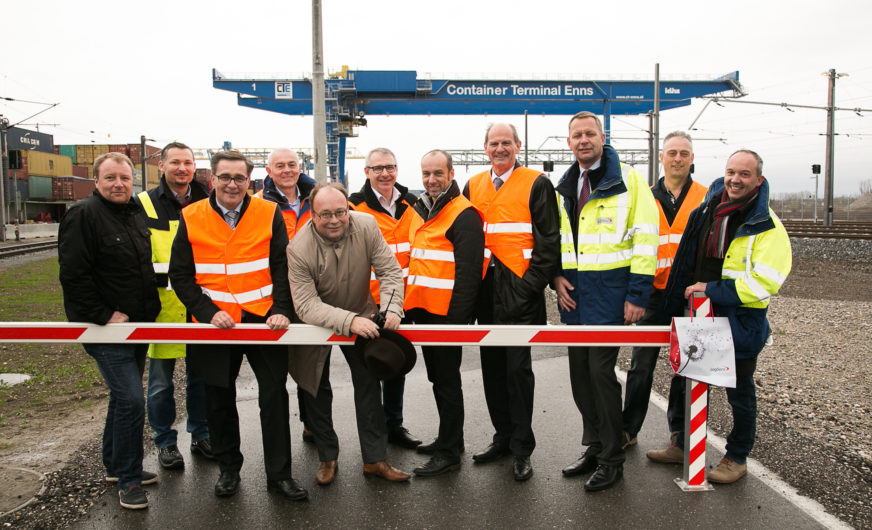 Started in April 2015, the modernisation of the Container Terminal Enns (CTE) was completed in early December as scheduled. A technical test trip was made on 1 December, thereby obtaining the operating authorisation according to the Austrian Railway Act.
Following a construction period of eight months, and exactly according to schedule, the expansion module of the Enns Terminal, including five new crane tracks suitable for block trains, two gantry crane systems of Künz and a storage area for 2,500 containers were completed and synchronised with the existing facility.
In total the Container Terminal Enns has nine, each 720 meters craneable tracks, and three gantry cranes, spanning the entire facility.
At the same time the target rail key control system and the entire switch, signal and safety equipment was renewed.
Overall design, construction and technical equipping was in the hands of LogServ Linz, a company of the voestalpine AG. This company has also obtained the relevant approvals for the terminal.
Given the total length of the rail facility of 21 kilometres, the connection railway of the Container Terminal Enns is the second-largest of the country, says Otto Hawlicek, Managing Director CTE. The expansion of the container terminal in Enns was increasing the attractiveness of combined transport and gives the local trade and industry access to the seaports and hence the world markets.
www.ct-enns.at