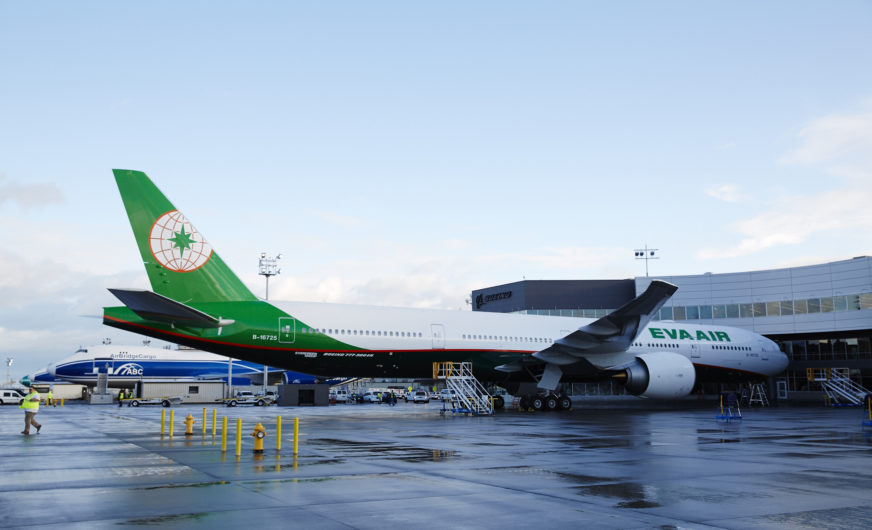 Eva Air took delivery of its 22nd Boeing 777-300ER (registration numbers B-16725) at the Boeing factory in Everett, Washington (USA) on 11 November, 2015. With the delivery, the Taiwanese airline unveiled a new corporate identity system and livery.
Eva Air became a launch customer for the 777-300ER in 2005, and the aircraft has become the backbone of our long-haul fleet. By the end of 2017, we will be operating more than 30 Triple Sevens,” said EVA Chairman K.W. Chang. Now they unveiled a new livery design to herald the continuing commitment to service innovation.
Eva’s new corporate identity retains its original compass design, borrowed from the logotype of the parent company – the respected Evergreen Group and symbolizing the airline’s seamless network and services. In the livery, the simplified tail design establishes the compass as the focal point for the Eva Air brand and represents the carrier’s commitment to quality service and flight safety. The elegant curve that flows along the length of the aircraft and the dark-green belly showcase the new difference in the livery design. Together, these livery design elements illustrate Eva’s commitment to becoming a globally respected airline and to maintaining consistency in its core identity and values.
Eva Air will add seven more Boeing 777-300ERs and six more A321-200s by the end of 2016. EVA will deploy its new 777-300ERs on North America routes, and increase the services to 77 flights a week.
The private Taiwanese airline Eva Air was established in 1989 as a sister company to global container-shipping leader Evergreen Marine Corporation based in Taipei. It currently operates a fleet of close to 70 Boeing and Airbus aircraft to more than 60 international destinations on four continents.
www.evaair.com