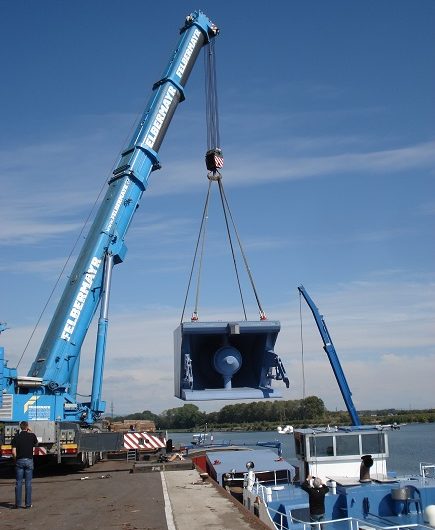 The Ennskraftwerke AG is presently converting the power plant Enns within the city limits of Enns according to state-of-the-art ecological and technological standards. The new turbine was delivered to Ennsport via the waterway along the Rhine-Main-Danube canal in a most environmentally-friendly manner.
After a short road transport final assembly took place directly at the power plant and finally the new turbine was lifted into the water.
The individual turbine components were transported on the Rhine-Main-Danube Canal from Trier to Enns. The company Felbermayer was in charge of unloading the turbine. The “last mile” of the heavy cargo transport took place via road.
The turbine has a width of 5,2 metres, a height of 4 metres, a length of 20 metres and an impeller diametre of 2 metres. At the beginning of October the port will start the trial run. As of November normal operation is to begin in the power plant in Enns. Once fully fitter the facility weights about 300 tons. The investment volume amounts to about 7.9 Million Euros.
www.ennshafen.at   www.ennskraft.at