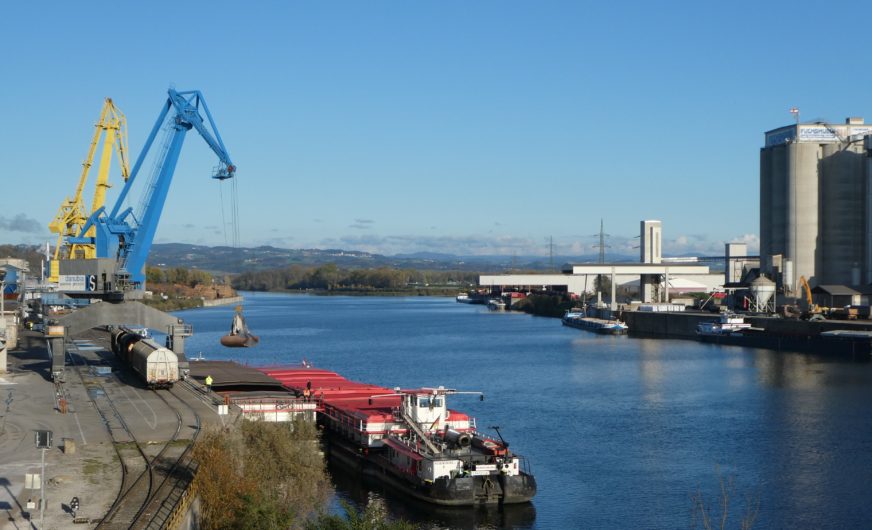 In 2019, the transhipment companies in the Ennshafen port handled a total of 782,000 tonnes across the quay, most of which was under good water conditions on the Danube. This figure is about 20 percent higher than the average water/land transhipment of the last ten years.

The two largest transhipment companies in Ennshafen, Danubia Speicherei and Fuchshuber Agrarhandel, each achieved their best annual transhipment results since they set up operations there. Growth was mainly seen in the goods groups salt, fertilisers, grain and oilseeds. Moreover, in December 2019, the volume exceeded the mark of 16 million tonnes since Ennshafen began transhipment in 1994.

The road and rail infrastructure in the port area was upgraded through the general renovation of the Ennshafenstraße. This included the expansion of the high-voltage power supply, a new rail siding for Bernegger GmbH, a track extension at the container terminal and the renewal of the road surface.

At Container Terminal Enns (CTE), a total of 395,000 TEU was handled last year. This means an increase of 8 percent over the previous year and the highest throughput since the trimodal link between road, rail and the Danube river was established.

The companies in the port are considerably expanding their facilities. At CTE, the third expansion stage was commissioned in autumn 2019. The investments of EUR 9.6 million included a fourth gantry crane, the extension to ten cranable tracks, each 720 metres long, additional parking areas for containers and two new access gates for large-volume trucks. As part of the terminal expansion, great attention was paid to digitalisation.

The water transhipment companies have also invested heavily. Danubia Speicherei has implemented innovations in terms of access and holding for trucks. Optimised logistics processes ensure that all vehicles are handled much quicker and more efficiently. Fuchshuber Agrarhandel has started to build additional silo facilities just before the end of 2019.

At the Fixkraft Futtermittel factory premises, a second factory access road including weighbridge and a truck wash were built and production facilities were modernised. Further investments in silo facilities and machinery are planned. Rauch Recycling added two new handling halls.

“In order to be able to offer the companies the best possible conditions for successful development, ecoplus – the Lower Austrian Business Agency – is extending the area of the Ennsdorf Business Park by ten hectares, which are reserved for water transhipment companies”, says Petra Bohuslav, Lower Austrian Minister for Economic Affairs.

The Ennshafen is the youngest public port in Austria. It connects the main transport routes of international goods traffic, the Rhine-Main-Danube waterway from west to east and the north-south railway lines from the Baltic Sea to the Adriatic Sea. Located in the largest contiguous industrial construction area of the Upper Danube, the Ennshafen positions itself as a trimodal transhipment centre.