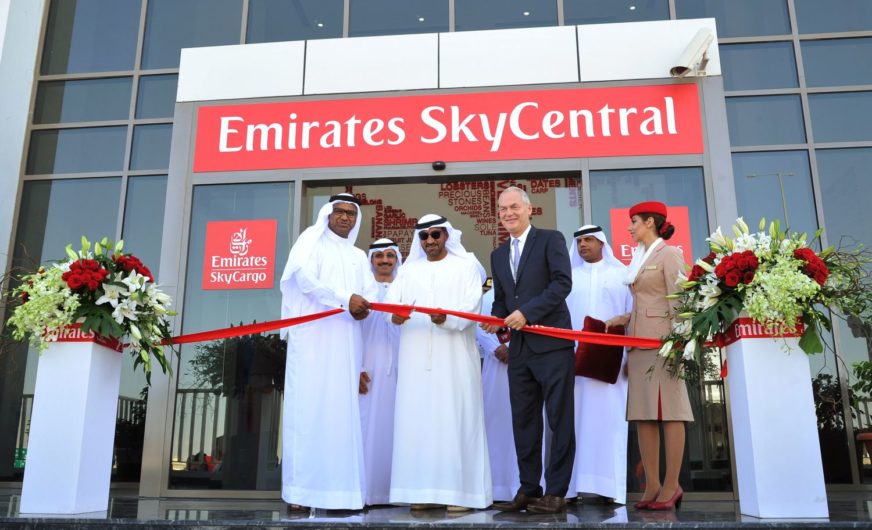 Emirates SkyCargo’s state-of-the-art cargo terminal at the Logistics District in Dubai South was officially inaugurated on 10 November by His Highness Sheikh Ahmed bin Saeed Al Maktoum, Chairman and Chief Executive of Emirates Airline and Group, further establishing Dubai as a leading global air cargo and logistics hub.
Named Emirates SkyCentral, the cargo facility is the home of Emirates SkyCargo’s fleet of 15 freighter aircraft, and was officially opened on the side lines of the Dubai Air Show.
Emirates SkyCentral is a dedicated freighter facility, and with 12 aircraft stands directly in front of the terminal, one of its key features is the close proximity of aircraft to the receiving docks, which enables quick movement of goods. The freighters that operate from Emirates SkyCentral fly to more than 50 destinations around the world.
“The opening of Emirates SkyCentral is an important milestone for us, as it represents our vision for future growth and firmly establishes Emirates SkyCargo as the world’s leading air cargo carrier across all its operational areas. The space it currently occupies on the land allocated to us at Dubai South is part of a much bigger area, which we can develop over time to increase our cargo handling capacity to achieve our vision of 12 million tonnes annually by 2050, from the current 2.3 million tonnes,” said Nabil Sultan, Emirates Divisional Senior Vice President, Cargo.
Emirates SkyCentral is located 77 kilometres from Dubai International Airport (DXB) – a convenient location with factories and forwarders in the surrounding areas, and in close proximity to a dedicated corridor to the Jebel Ali Port and Free Zone.
With Emirates SkyCargo’s dual operation of belly hold cargo being managed at its Cargo Mega Terminal at Dubai International and freighter cargo at DWC, cargo is moved 24/7 by truck between the two airports via a bonded virtual corridor. Since Emirates SkyCentral first became operational in May 2014, the movement of cargo between the two airports has become a seamless process and is now firmly integrated into its operations, with a transit time of just five hours between the arrival of goods to their departure from freighter to belly hold and vice versa.
Emirates SkyCargo is the freight division of Emirates Airline and is the world largest international air cargo carrier. In the 2014-15 financial year, it reported a revenue of AED 12.3 billion (USD 3.4 billion), a 9% increase over the previous year. Emirates SkyCargo currently uses cargo hold capacity in Emirates’ fleet of more than 240 aircraft, including 15 freighters – 13 Boeing 777-Fs and two B747-400ERFs – and provides air cargo services to more than 145 destinations around the world.
www.skycargo.com