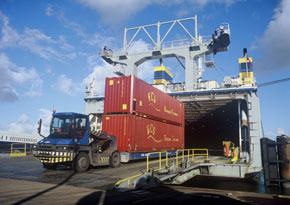 ECS, whose core activities are full container loads across Europe with special competencies in shortsea connecting UK, Ireland, The Baltics, Greece and Turkey to the continent, operates a fleet of 6000 European Standard Containers (33 EU plts) and 1000 European Refrigerated Containers (33 EU plts). This enables the company to fully explore intermodality.
ECS is thus one of the biggest rail enablers, setting up trains wherever possible – in line with the CSR mission (Corporate Social Responsibility). The last mile out of the harbor or any in-land terminal is trucked with 1,000 trucks operational of which +350 in own fleet.
The investments are done in all asset classes but 2 clearly stand out: first our “Second Tower” is due in December, a newly built office complex at a top location in Venlo, The Netherlands, next to the highway to Duisburg (capacity for 200 ECyeS’ers). Duisburg, by the way, the trimodal platform connecting shortsea (Zeebrugge, Rotterdam and Moerdijk) to the European rail network with ECS lines to Italy, Poland, Austria, Hungary, Turkey, etc.
The second extremely important investment goes to software to increase the efficiency of its staff by optimally combining all modes of transport for the full containerload within the container.
All this is done with one major focus: CSR. Less CO², less cargo on the road, less empty mileage, a better environment and the best place to work.
The ECS headquarters are based in Zeebrugge (Belgium) with foreign offices in The Netherlands, Italy, UK, Ireland, France, Germany, Poland and Slovakia.
Facts and figures ECS European Containers
• 260 white collar workers
• 500 blue collar workers
• EUR 230 million turnover in 2014
• 195.000 FCL in 2014
• 5,400 ambient 45′ High Cubes
• 1,000 temperature controlled 45′
• 30,000 m2 warehouse facilities in Zeebrugge
The 2015 records are:
• Double-digit profitable growth (15%)
• Number of full loads per day: +1,000
• Turnover: EUR +260 million
• Investments in 2015: EUR +30 million
• EBITDA: EUR +20 million
www.ecs.be