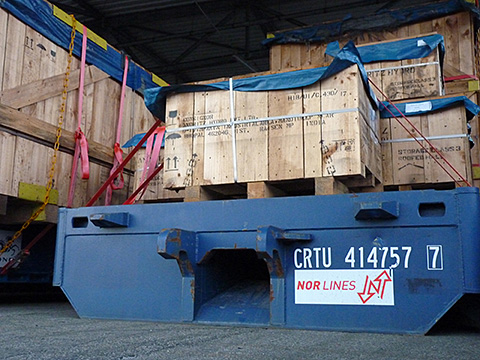 DSV Air & Sea Projects is managing the heavy haulage of generators on behalf of the Andritz Hydro company. The first shipment from India to Germany was carried out via the Wilhelmshaven container terminal. Then the cargo was transported to Norway via the Cuxport terminal in Cuxhaven. The generators are destined for a new power plant, which is being built in a remote mountain area in northern Norway, and is due to start feeding the network in the summer of 2016.
Andritz Hydro, a supplier for hydraulic power generation, produces its generators in Mundra Bhopal, India – where the plant shall be ready for delivery to Europe by September. The Norwegian DSV Air & Sea project division in Bergen elaborated a shipping concept taking into respect also timely factors. The shipment consists of four boxes with up to 6 meters in length and a total weight of 115 tonnes, and one 2 x 40`HC container.
After examining several shipping options, they decided to ship the complete load by container ship with their longstanding partner Maersk Line, from Mundra to Wilhelmshaven. In Germany, DSV Air & Sea GmbH assumed the import procedures in Bremen, discharge from the containers and forwarding the consignment to Cuxhaven. From the Cuxport GmbH’s terminal there the goods were eventually transported by a LNG powered RoRo ship of Norlines to Bodø in Norway, and reloaded onto special trucks, which can accomplish the challenging route to the final destination point in the mountain area.
www.seaports.de