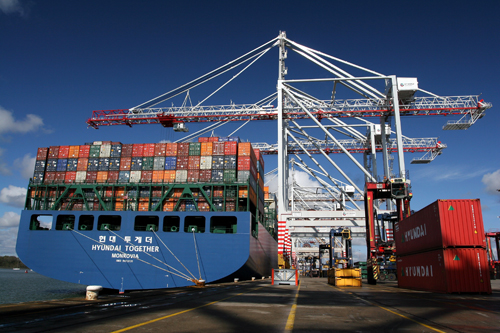 DP World Limited agreed with Associated British Ports (ABP) to extend the licence agreement for DP World Southampton for a further 25 years until 2047. Simultaneously, it has acquired the remaining 49% stake in DP World Southampton from ABP, making DP World the sole owner of the business.
Chairman Sultan Ahmed Bin Sulayem comments: “We are delighted to announce the 25 year extension of the licence agreement for DP World Southampton, which is one of the most efficient terminals in the UK and the only deep-sea container terminal on the south coast of England. Also, through full ownership of DP World Southampton, we will now be able to combine with DP World London Gateway, the newest deep-sea container terminal and logistics park at the heart of the UK’s biggest consumer markets, to offer our customers the best possible service and long term growth in the UK. A unique and very exciting proposition.”
Ganesh Raj, Senior Vice President and Managing Director of DP World in Europe and Russia said: “This news underlines our commitment to the UK and our ongoing presence in developed markets as an important part of our global network. I look forward to the synergies that the two ports will bring to our operations and the contribution they make to the UK economy, infrastructure and local employment.”
ABP Chief Executive James Cooper said: “This isn’t just good news for the port of Southampton but this is good news for the entire city. The deal provides a solid foundation for the continued growth and development of the UK’s most productive container port.”
The DP World Southampton terminal covers an area of more than 80 hectares, all situated within its own secure compound. Huge amounts of investment have gone into bigger cranes, deeper berths, an expanded fleet of terminal vehicles, and upgraded IT systems. Development plans are also in hand to increase the terminal’s capacity in line with customer demand.
Terminal facts:
•    1.35 km of deepwater quay (up to 16 metres depth alongside)
•    Accommodates vessels up to 400 metres in length
•    15 quayside cranes with state of the art super post panamax capability (24 wide).
•    Fleet of flexible straddle carriers.
•    www.dpworld.com
www.dpworld.com