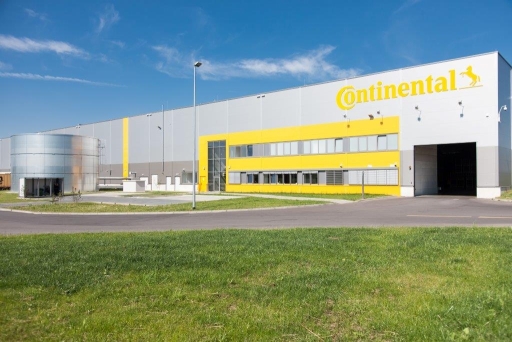 The Dietrich-Honold Logistik SRL moved into the new factory warehouse of the Continental Group in Timisoara (Romania). The facility offers a space of 40.000 m² and is operated in three shifts by Dietrich-Honold. It is regulated with SAP software with radio data transmission.
There is a shuttle service with presently more than 10 tours per day ex the Continental plant. The facility was designed as a block warehouse with a high degree of compaction. It takes on the production of the tyre plant in Timisoara and focuses on direct deliveries to original equipment customers.
Storage takes place in special tyre frames that can weigh more than 1,2 tons. The relocation became necessary as warehousing space in the former factory warehouse was partly needed by production. In total warehousing capacity has been significantly expanded. Line inspection, sorting of the different tyre types and buffer storage will continue to take place directly at the plant.
On about 100.000 m² of warehousing space, Dietrich-Honold carries out logistiics activities for several customers at the Romanian locations in Timisoara and Sacalaz with about 400 employees.
www.dietrich-logistic.com   www.honold.net