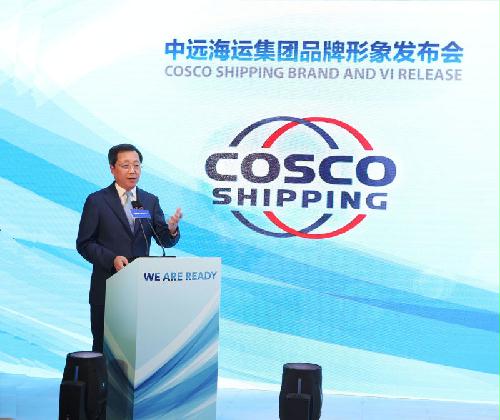 The new logo upgrades the original shipping image to two, interlocking circles which symbolize the logistics supply chain, while simultaneously demonstrating the Group’s global presence across industries and geographical boundaries, and showcasing its “6+1” industrial clusters strategy with shipping as its core business. The four curves represent its cultural concept of “One Team, One Culture, One Goal and One Dream”, which guides and supports the Group on its path of development. The two, interlocking circles also embody the history of the Group as a merged entity of COSCO and China Shipping and the new sign they form signifies not only sustainable operation of COSCO Shipping, but also the close cooperation between the Group and its customers.

In addition to the new logo, COSCO Shipping also launched a corporate visual identity system (VIS), including its website domain Name www.coscoshipping.com and email domain name “@coscoshipping.com”, corporate flag, sailor’s uniform, and marked containers, funnels, ship’s rails, and the like. The mascot and QR code of its WeChat official account were also announced.

According to Capt. Xu Lirong, Chairman of COSCO Shipping, the former COSCO and China Shipping each had their own, individual logos and VIS, which played a vital role in building their international brands and recognition. But today, the Group is at the forefront of a new historical moment and shouldering a new historical mission. The new brand image will bridge the past and the future.

Capt. Xu pointed out that since the VIS is an external form of brand building, COSCO SHIPPING will place more emphasis on the deep connotations behind the brand image. The new logo, alongside the slogan “We are Ready”, contains the Group’s philosophy of “sharpening global competitiveness, improving service quality, boosting green growth, accomplishing historical milestones, fulfilling corporate social responsibilities and enhancing the value of employees”.

Furthermore he stressed that COSCO Shipping ranks Number One worldwide in carrying capacity of four, different types of vessels and takes a leading position among other areas. In order to grow bigger and stronger, the Group shall not only expand its scale, but more importantly, enhance its international competitiveness, capabilities of allocating global resources and sustainable development, and transform its scale advantage to economies of scale.

Moreover, guided by the philosophy of customer orientation, the Group will change its traditional marketing guidelines, and shift its focus from products to customer needs in order to improve overall customer satisfaction. It is committed to delivering quality services to customers, both at home and abroad, and becoming the most trustworthy company in the world.

Additionally, it will intensify efforts in energy saving and emission reductions, actively foster green competitiveness, stimulate a shift in corporate values with green development concepts, and place a stronger regard for and awareness of environmental protection as a developmental requirement.

The consolidation of COSCO and China Shipping is a significant achievement of China’s SOE reform, a major initiative for implementing China’s Belt and Road Initiative, a further strategy of building a maritime power, and an inevitable choice to cope with international competition and to improve quality and effectiveness. When the new Group was established, a new journey has begun.