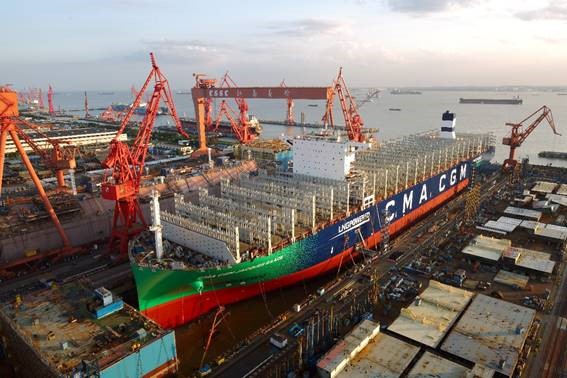 This major milestone in the construction of the world’s first LNG-powered ultra large containership was reached on September, 25th at the Shanghai Jiangnan-Changxing Shipyard, at an event attended by Rodolphe Saadé, Chairman and Chief Executive Officer of the CMA CGM Group, French and Chinese officials, business leaders and CMA CGM Group customers.

In 2017, Rodolphe Saadé announced his decision to order a series of nine 23,000-TEU containerships that would be the world’s first ever to be powered by liquefied natural gas. Through this strategic choice, the CMA CGM Group reaffirmed its assertive commitment to safeguarding the environment and leading the industry’s energy transition.

These new vessels will join the Group’s fleet in 2020 on the French Asia Line (Asia-Northern Europe) and will be registered in the French International Register (RIF).. In addition, the nine newbuilds will feature a state-of-the-art bridge design, the world’s first to deliver four major.

By naming the world’s first LNG-powered, 23,000-TEU container ship CMA CGM Jacques Saade, the Group has symbolically given the name of its Founder to its future flagship.