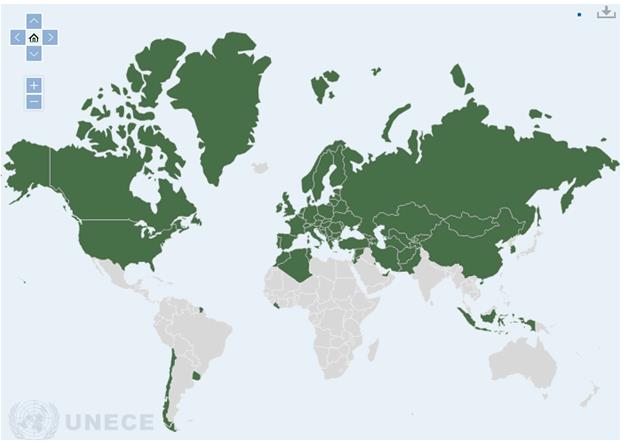 China has taken a key step towards the development of international economic corridors with its regional trading partners and the rest of the world with the ratification of the United Nations TIR Convention.

The Secretary-General of the United Nations, acting in his capacity as depositary, informed that the Government of the People’s Republic of China deposited its instruments of accession to the TIR Convention, 1975, on 5 July 2016, bringing the number of Contracting Parties to the TIR Convention to 70 on the 5 continents. The Convention will enter into force for China on 5 January 2017.

EU-China trade reached EUR 520 billion in 2015, and some 60 percent transited by sea, according to Eurostat estimates, while rail and road accounted for some 10 percent of China’s exports to the EU, and 3.2 percent of the EU’s  exports to China.

“China’s accession to the TIR Convention will open new efficient and faster transport opportunities and transport routes between China and Europe. It can become a real game changer for international trade and is a strong contribution to the Chinese vision for “One Road One Belt”. We warmly welcome China to the TIR Convention and look forward to working closely with China and all TIR contracting partners to turn this decision into strong opportunities for trade, transport and economic growth,” said UNECE Executive Secretary Christian Friis Bach.

The TIR transit system is the only global intermodal customs transit system, constituting a major facilitation tool for both transport and trade. Over 35,000 road transport operators worldwide are already authorised to use the TIR system effecting around 1.5 million TIR border crossing procedures per year.

The accession of China will further foster the opportunities for economic growth and development of China and transit countries, facilitate trade with Central Asian countries, Mongolia and the European Union, as well as stimulate China’s transit and logistics services. China’s neighbours on its northern and western borders are already Contracting Parties to the TIR Convention, including Kazakhstan, Kyrgyzstan, Mongolia, the Russian Federation and Tajikistan.

The application of the TIR system will provide China the opportunity to shift its export goods under a single, simplified transit procedure to EU countries for all modes of transport. More than 1,200 Chinese road transport companies ship freight across China’s land borders, conducting more than 700,000 transit operations per year.