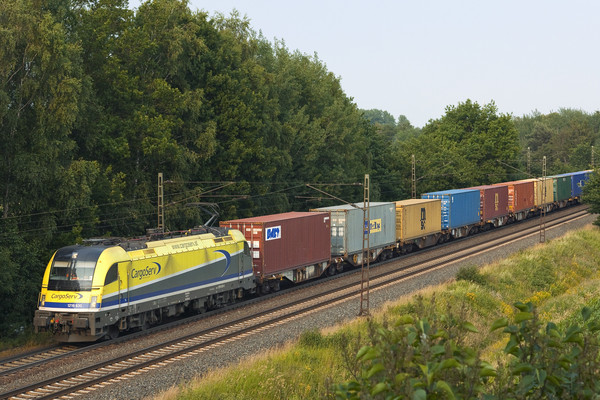 Providing a connection to major North Sea ports in cooperation with DB Schenker, CargoServ opens the gateway to the world for Austria’s industry: Since early January 2016, the private railway enterprise operates container transports to Germany on behalf of the forwarding company. They provide traction for up to eight weekly rotations.

The container shuttle calls the terminals Vienna Freudenau Hafen, Linz Stadthafen and on the second stage also the recently opened CT Enns, to link them to the North Sea ports of Hamburg and Bremerhaven.

DB Schenker charged CargoServ with the operation of the block trains in Austria, taking over the trains at the border in Passau. The Deutsche Bahn locomotive remains with the train; traction in Austria, including supply in the terminals is provided by CargoServ.

The last mile between the shunting station in Linz and Linz Stadthafen is covered using the diesel locomotive of CargoServ (V100 Ost, 1504 series). Moreover CargoServ provides the staff until Passau. About 48,000 container units shall be transported per year.

Cargo Service GmbH is a 100% subsidiary of Logistik Service GmbH (LogServ), based in Linz. As a private rail transport company, CargoServ offers alternative systems for cargo transport in block trains on the public railway network. Today CargoServ transports a freight volume of about 4 million tonnes of raw materials and finished products per year.