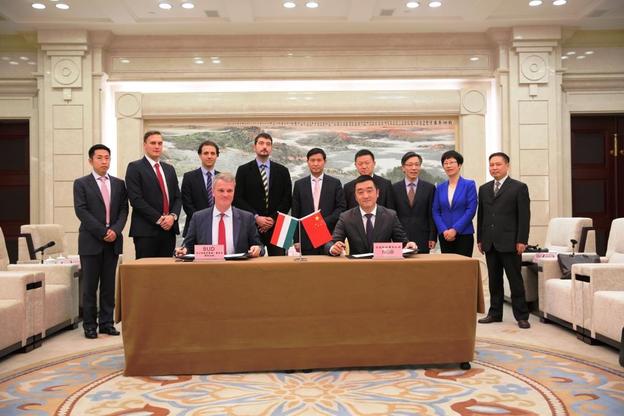 The representatives of Budapest Airport and Ningbo International Airport established direct contact in 2014, and now formalized their increasingly close cooperation in an agreement, which also harmonizes with the “Opening to the East” policy of the Hungarian government.
Deputy Minister of Foreign Affairs and Trade of Hungary, Dr László Szabó held talks with the Vice Governor of Zheijang Province and the Major of Ningbo city in June 2015 in Ningbo. During the meeting Mr. Szabó welcomed the possibility of launching the Budapest-Ningbo direct and cargo flight. He emphasized that the direct flight and cargo connection can significantly contribute to strengthened economic and trade relations and further develop people-to-people contacts between Hungary and China.
The leaders of Ningbo Airport previously visited Budapest, to gather information on development prospects in Central and Eastern Europe and opportunities for the launch of direct cargo flights. This dialog has now been elevated to a new level with the signing of the strategic cooperation agreement, which was also attended by Olivér Pál Pintér, deputy consul general of Hungary in Shanghai, and Wang Renzhou, deputy mayor of the Ningbo Municipal Government. The document was signed on behalf of Budapest Airport by property and cargo director René Droese, along with senior cargo manager József Kossuth, and by director Zheng Zhiyin from the Ningbo International Airport and Logistics Development Company.
Ningbo International Airport is one of the fastest-growing airports in the Yangtze River delta region. It handled 6.36 million passengers and approximately 113,000 tons of air cargo in 2014. The airport’s 3.2 kilometer-long runway is suitable for all large cargo aircraft. The economic significance of the region is further enhanced by the fact that, in addition to the airport, it also has a busy seaport. The airport plans to increase passenger traffic to 12 million and cargo volume to 500,000 tons in 5 years, by 2020, with the most significant development expected in the cargo area.
www.bud.hu