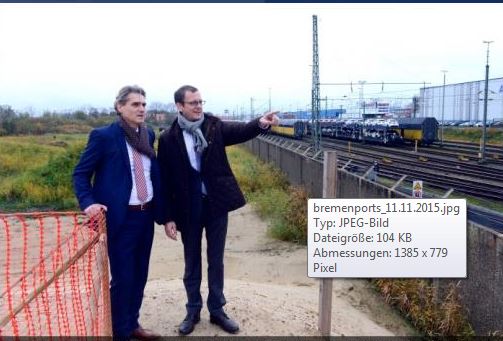 40 million this decade, to expand the Bremerhaven tracks of the port railway and shift more cargo to trains.

At the edge of the container terminal the largest single project of this investment package is being implemented now. For a total of EUR

29.5 million the bremenports port company is expanding the port railway station Imsumer dike. So far, eight tracks were available to the railway companies next to the Senator-Borttscheller-Straße. In two years it will be 16. “Bremen invests as required in the future of the automobile and container port,” said the competent Senator Martin Günthner at the official start of construction on November 6.

The Economic and Port Senator recalled the strong gains that have shaped the port railway in recent years and brought it to its capacity limits. In 2014 the maritime port of Bremerhaven was served by a total of about 30,200 freight trains (incoming/outgoing). This means on average 581 trains per week – during the peak even 660 trains. For 2015, the statistics already shows twelve weeks in which the overseas port was called by more than 620 freight trains.

Despite the current weak economy in many parts of the world seaborne cargo throughput will continue to grow, said Martin Günthner. “This has a direct impact on the capacity of the port railway. In the medium term we expect in Bremerhaven to face an increase to 770 freight trains per week. There is no alternative to the current investment in new tracks and modern railway technology. ”

As the senator added, Bremerhaven’s hinterland container traffic has reached a market share of 47 per cent. This value is the highest in a European port, and a proof of the strength of the local railway port.

The car traffic in the hinterland has a market share of railway at around 80 per cent.

Expansion IMSUMER Dike at a glance: