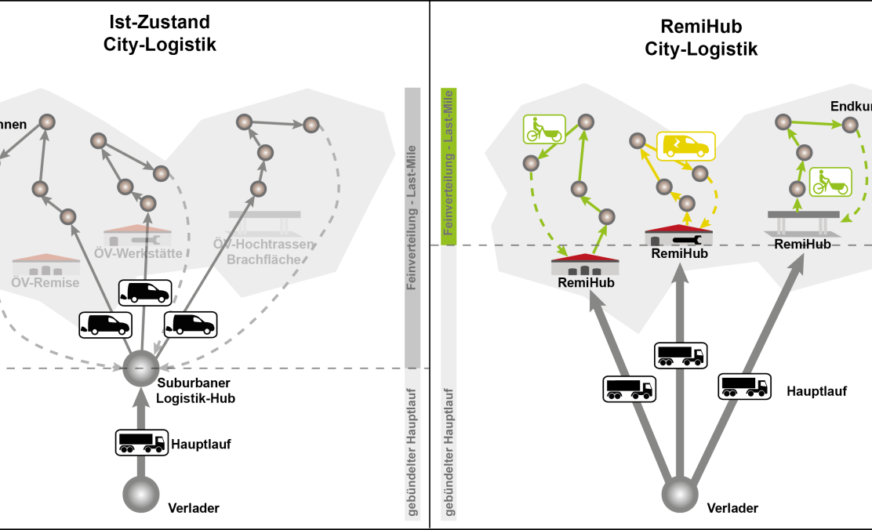 The forecasts are similar to each other: the boom in e-commerce will steadily increase the volume of parcels in the coming years. Experts expect a tripling of the packages to be delivered by 2028. THis means a true package avalanche that is increasing pressure on involved infrastructures.

More environmentally friendly means of transport such as e-cars or cargo bicycles, some with electric drive, are not yet designed for such distances. The research project “RemiHub” from the program “Mobility of the Future” aims to solve this problem creatively.

The project idea is to use existing, centrally located areas of public transport as temporary, urban logistics hubs and to operate orders with cargo bikes and in the future also with e-vans or automated public transport vehicles in inner-city delivery. The dense network of Wiener Linien public transport serves as a pilot and test area.

“Who has many inner-city areas that can be used as a logistics location?” The focus was on public transport buildings and plots, according to project manager Roland Hackl from tbw research. The idea: Tram depots and bus garages are largely empty during the day, because the vehicles are in use.

Other areas, such as under high tracks of the subway, are rarely used. However, these surfaces are often located in the centre. They could be made available on a temporary basis to courier, express and parcel services, to turn them into temporary inner-city logistics hubs.

Packages delivered by trucks to such a hub could be brought to their addressees – both individuals and businesses – by means of cargo bicycles or other alternative means of transport. “In this way, the last mile could be kept short and use other means of transportation than a 3.5-tonne lorry,” says Roland Hackl. Wiener Linien also won the project, as did the Vienna University of Technology and the heavy goods transport company Heavy Pedals.