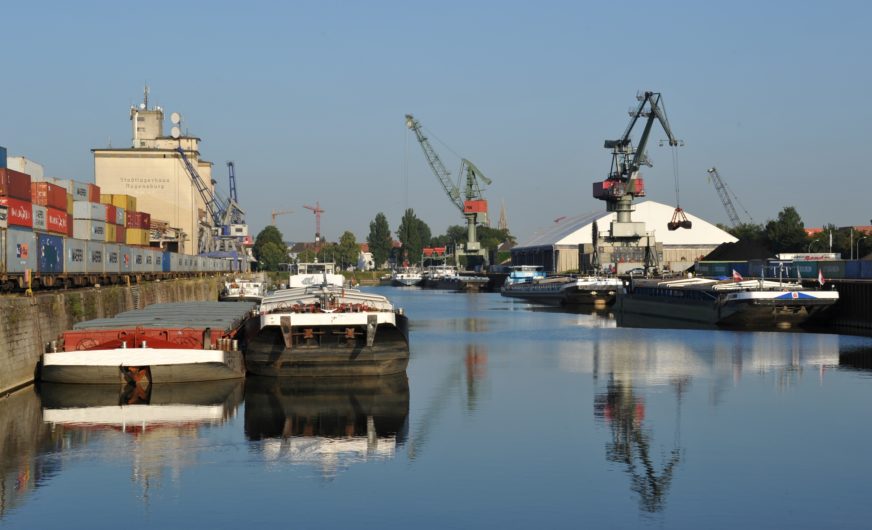 The bayernhafen sites in Aschaffenburg, Bamberg, Nuremberg, Roth, Regensburg and Passau transhipped a total of 9.71 million tonnes of goods on waterway and railway in 2015. This is about 5.8 percent less than in 2014, and 1 percent below the average of the past decade. Whereas rail cargo throughput was almost on the previous year’s level, with 6.27 million tonnes, the 3.44 million tonnes on vessels represented a decline by 14.65 percent. Cargo throughput by truck was 21 million tonnes (up 0.28 %).

“During the dry year 2015, low water impacted the river shipping business, also on the Rhine. The transhipment volume per vessel declined. The volume of steel and mineral oil products transported on the waterway or railway dropped. Due to the energy revolution, no major increases can be expected in throughput volumes of mineral oil and coal turnover on the long term. Despite the strike in rail cargo transport in 2015, railway throughput remained almost on the previous year’s level“, reads a press release of the bayernhafen group.

Container handling at the bayernhafen locations Aschaffenburg, Bamberg, Nuremberg and Regensburg rose by 7.9 percent to a total of 445,902 TEU. Modal shift in freight transport over long distances is a key objective of the group. The basis therefore is are well-connected port locations allowing an intelligent combination of ship, rail and truck in the transport chain.

In this context, EUR 10 million are earmarked for an investment into the expansion of the container terminal in bayernhafen Regensburg. Changes in area and the demolition of old warehouses allow an expansion on the existing port area, and the connection to the quay. Start of operation is scheduled for autumn 2016.

In 2015, the bayernhafen group invested a total of about EUR 6 million – among others into the preparation and expansion of settlement areas, in the railway infrastructure of the sites and a transfer apparatus for the bayernhafen Aschaffenburg.

Since last year, the bayernhafen sites are connected with other logistics centers worldwide: Apart from the existing routes from and to German seaports, Rotterdam and Antwerp, and transalp to Italy, four new connections are offered now for combined transport: Since the end of January 2015 a train with semi-trailers is operated by Schenker EOOD between the TriCon container terminal at bayernhafen Nuremberg and Ruse in Bulgaria.

“Import and export need open ways,” says Joachim Zimmermann, managing director of the bayernhafen group. “We see ourselves as pioneers, and together with partners we initiate worldwide connections to Bavaria. This strengthens Bavaria as a business location and logistics for Bavarian industrial enterprises. In parallel, as a location-architect, we are adjusting the surfaces continuously to the requirements of the residents and the shipping industry. ”