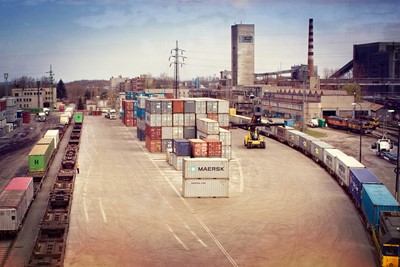 AWT, a member of the PKP Cargo Group and the second largest rail carrier in the Czech Republic, is going to expand the surface of the terminal in Paskov near Ostrava by 40,000 square metres. That will increase the facility’s storage capacities by 2,400 TEU. Its capacities are currently used to the full.
When the construction works are completed, the total surface of the transshipment terminal will be 71,000 sq.m: and its handling potential will be doubled, reaching 4,800 TEU.
AWT plans to expand the Paskov terminal’s connection network by adding new ports, such as Gdańsk and Gdynia. The cooperation with PKP Cargo will include Ostrava-Paskov in the Baltic-Adriatic-North Sea logistic triangle, making the terminal near Ostrava the main transport hub in this part of Europe.
“For AWT, the Paskov terminal is the jewel in the crown. Its perfect location, professional management and customers’ trust make it a crucial element in the development plans of the PKP Cargo Group. It already handles traffic from ports in Germany, Slovenian Koper, Italian Trieste and Turkey. We have an ambition to involve it in the operation of the New Silk Road’s and Polish ports’ traffic, as well as in the better use of the Baltic-Adriatic corridor,” says Adam Purwin, the President of the PKP Cargo Management Board.
The AWT group has handled intermodal transport since 2006. That is when the Ostrava-Paskov container terminal was built at the site of the former Paskov Mine. Nowadays, it is the largest intermodal terminal in the Czech Republic and an important transshipment centre in this part of Europe. It offers transport services to the largest cities in Europe: Hamburg, Rotterdam, Bremerhaven, Koper and Trieste, as well as Czech terminals in Prague, Mělník and Lovosice. It is used by major automobile manufacturers: Hyundai, KIA, Opel, Škoda and VW.
In order to modernize the facility, AWT has contracted the construction of two new tracks (each 350 metres long), a parking lot for 40 tractor units, a connection for refrigerated containers and a special place for containers with hazardous materials. Such a significant surface and services expansion requires also a modern activity management station, namely a new control room.
“Container transport is the most prospective sector of the market, assuring the diversification of AWT revenues and the expansion of the customer base. Currently, 10% of AWT transport is intermodal. Investing in the transshipment infrastructure, benefitting from the cooperation with PKP Cargo and expanding our offer to the markets of countries in Central and Southern Europe will help to increase this figure in the following years,” says Zbigniew Klepacki, the AWT Chief Executive Officer.
www.awt.eu  www.pkpcargo.com