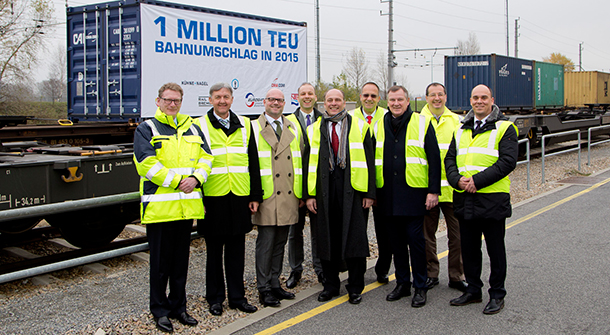 This year’s 1 millionth railway container in the seaport of Bremerhaven was carried to Austria. It was shipped by the forwarding company Kuehne + Nagel Austria, who, together with representatives of Eurogate-Terminals and Container Freight Station (CFS), celebrated the reception of the container from the CMA CGM shipping company in Bremerhaven on 9 December at the WienCont terminal in the port of Vienna Freudenau.
The north-German seaport and the Republic of Austria form a promising symbiosis. There are daily block trains to Austria, operated by different railway companies, meaning a goods connection from Bremerhaven to Austria’s big four container terminals in Vienna, Linz, Enns and Salzburg.
The outstanding development of the railway connections has also gained importance for Kuehne + Nagel in the past years. Offering a rotation service between Bremerhaven and Austria several times a week, we can offer our customers optimal transit times“, says Franz Braunsberger, CEO Kuehne + Nagel Austria.
Wolfgang Schiemann, CEO Eurogate Container Terminal Bremerhaven: “Austria has a seaport – namely the port of Bremerhaven. Due to the increasing competition in the maritime ports it is very important to offer intelligent logistics chains in our neighbouring countries.
Combined with increasing export volumes from Austria this may lead to future bottlenecks in empty containers supply, which could be avoided through stevedoring directly in the seaport.“
The Container Freight Station (CFS) of the Eurogate Container Terminal Bremerhaven offers various services, such as stevedoring of empty containers in the seaport. This way the equipment is available to Austrian shippers, according to their demand. Shipping can be performed very quickly, as the packing station is located directly at the Eurogate maritime terminal. In 2015 about 50 per cent of the export volume handled at the Container Freight Station Bremerhaven – such as beverages, cellulose, project business – came from Austria.
In the other sense, CFS unpacks imported containers and stores goods, so they can be picked up by their owners at any time. The required goods can be sent to Austrian within one day on the railway.
www.eurogate.eu.