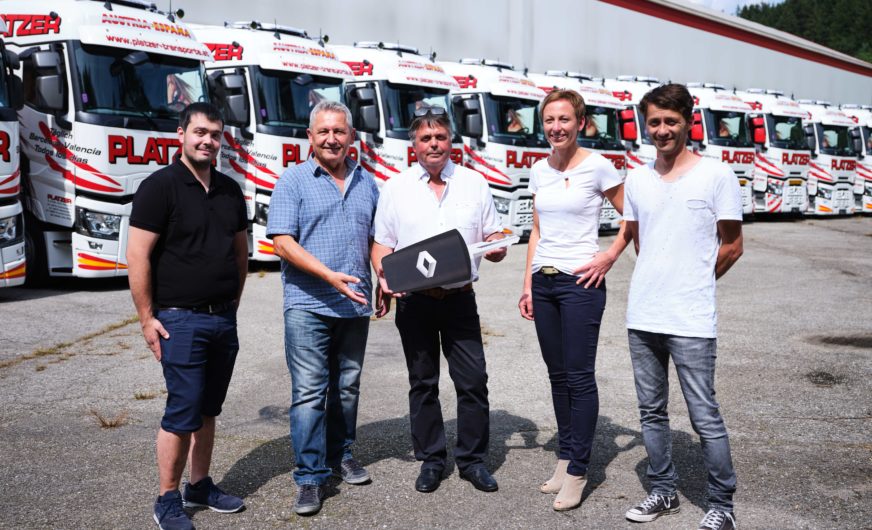 In August 2019, 22 new Renault Trucks “T High” were added to the fleet of Platzer, a family-run forwarding company from Upper Austria. “The trucks are used for classic long-distance transport,” explains Markus Platzer junior. The company was commited to traffic with in France, Spain, Portugal and Morocco, which was one of the main reasons to decide once again in favour of Renault Trucks.

Markus Platzer: “Anyone who travels day by day in the home market of Renault Trucks, as we do, will quickly notice the advantages of putting more emphasis on the rhombus brand in France. “It is not by accident, that Renault Trucks has always been the dominant player in the French market of commercial vehicles. Entrepreneurs and drivers also benefit from a close-knit after-sales network.

The company also feels the importance of the Renault Trucks brand in every respect in Spain. With the delivery of the 22 vehicles, Renault Trucks can once again give a strong sign of life in the Platzer fleet. “At the moment half of our fleet is wearing the rhombus on the radiator grille again.”

In terms of equipment, the new Platzer Renault Trucks are at the forefront. With 520 hp under the High Sleeper cab, Retarder, Mediapaket Roadpad+ and stationary air conditioning, they orient themselves in all matters at the upper end of the options of Renault Trucks.

Spedition Platzer has been around since 1935. Since then, the company in Upper Austria – Vöcklamarkt, has become a medium-sized transport specialist for imports and exports from and to Spain.In 2009 Platzer Austria has founded Austria_Espania S.L. in the Spanish ceramics center of Villareal, with local, skilled personnel and storage space for goods of all kinds, like at the location in Upper Austria.