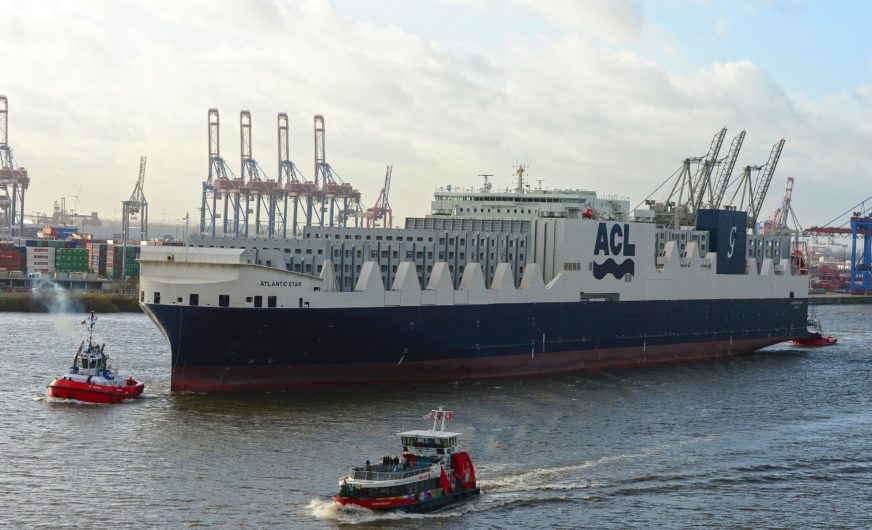 The ACL shipping company is renewing its ConRo fleet on Transatlantic services between North America and Europe by bringing the first of five new and innovative ConRo vessels of the next G4 generation into service with the Atlantic Star. She will be cleared for the first time in the Port of Hamburg at O’Swaldkai on 18 December.
A member of the Grimaldi Group, ACL commenced work alongside experts on the design of the new ConRo fleet back in 2008. Later, in September 2013, initial moves on steelwork for the Atlantic Star followed at the Hudong-Zhonghua Shipbuilding yard in Shanghai. The new design offers space for 3,800 containers, while up to 1,300 cars as well as oversize and heavy RoRo cargoes can be loaded across 28,900 m² of RoRo space.
That represents a 105 per cent increase of container slot capacity compared to vessels of the previous G3 class and of RoRo capacity by 45 per cent. In addition, 31 per cent more cars can be accommodated below deck.
This new ship design offers flexible loading possibilities for containers, cars, SUVs, large vehicles, and particularly heavy and bulky RoRo cargo. At 7.4 metres, the RoRo decks are especially high, while at
2.10 metres. If required, part of the RoRo deck space can also be utilized for containers, creating additional capacity for 739 TEU.
The ship is 296 metres long, 38 metres wide and has a load capacity of 45,000 tonnes. Fully loaded, her draft reaches 11.50 metres. The loading ramp can accept loads of up to 420 tons. A substantial improvement has also been achieved in CO2 balance. Thanks to modern propulsion techniques, emissions per container are 65 per cent lower than with ships of the preceding class.
Four further vessels of the same design will be delivered next year, namely the „Atlantic Sail“, „Atlantic Sea“, „Atlantic Sky“ and „Atlantic Sun“.
www.hafen-hamburg.de