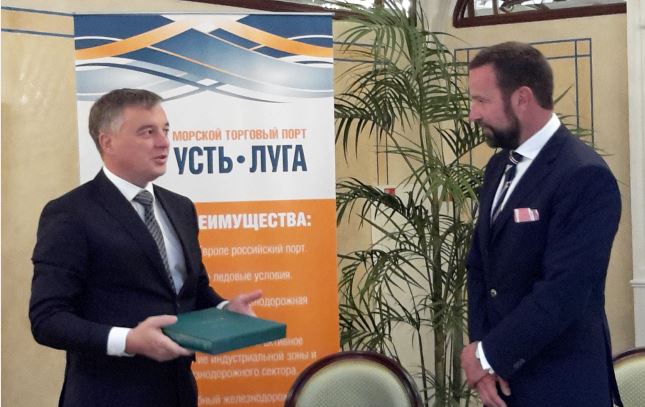 The Port of Kiel has been connected to Russian ports by ferries for 25 years. To celebrate this anniversary, the Port of Kiel, the DFDS shipping company and CIS Cargo, specialising in transports between Western and Eastern Europe, hosted a port evening in St. Petersburg.

In the course of this event on September 22, a letter of intent was signed by Dr. Dirk Claus, Managing Director Seehafen Kiel GmbH & Co. KG, and Mikhail Talanenko, General Director Sea Commercial Port of Ust-Luga, according to which the Port of Kiel and the Sea Commercial Port of Ust-Luga want to cooperate more closely. Dirk Claus: “The current trade restrictions between the EU and Russia will not continue forever. The exchange of goods will come alive in the future. ”

The agreement of the ports is aimed to promote the exchange of goods and joint marketing activities. In addition, know-how should be exchanged about port development, ship handling and the development of hinterland transport.

Ferry traffic with Russia was launched in July 1991, when “Anna Karenina” of the former Baltic Line Coming arrived from St. Petersburg and moored in Kiel for the first time. Over the years, in addition to St. Petersburg also the ports of Kaliningrad and Vyborg were called. Since 2011 a weekly liner service of DFDS was run between Kiel and Ust-Luga, which is operated as part of a slot charter agreement with Finnlines from this year. The service accepts trucks, trailers, containers, agricultural and construction machinery, cars for export as well as project cargo. Closing is six hours before the ship’s departure. Dirk Claus: “The route across the Baltic Sea is economically and environmentally advantageous over long-running truck transport. Intermodal transport chains via the ports of Kiel and Ust-Luga provide a perspective. ”

Since 2001 the transports to Russia and the Baltic States have been concentrated in Kiel’s Ostuferhafen, the freight and logistics center of the port. The RoPax ferries of DFDS are linking Kiel to Klaipeda, Lithuania on a daily basis. St. Petersburg and Ust-Luga are called once per week by RoRo transport to Russia.

Cargo shipped via Ust-Luga are forwarded both to Moscow, western Russia, Kazakhstan, Uzbekistan, China and Afghanistan. CIS Cargo group is also a partner for these routes, who has many years of experience in Eastern European hinterland transport and has direct contracts among others with Russian Railways (RZD) and PUL Trans.

In the opposite direction, in particular forest products are imported from Russia and transshipped in Kiel. For the storage of lumber, 12.000 m² of additional warehouse space were recently put into operation in the Ostuferhafen.